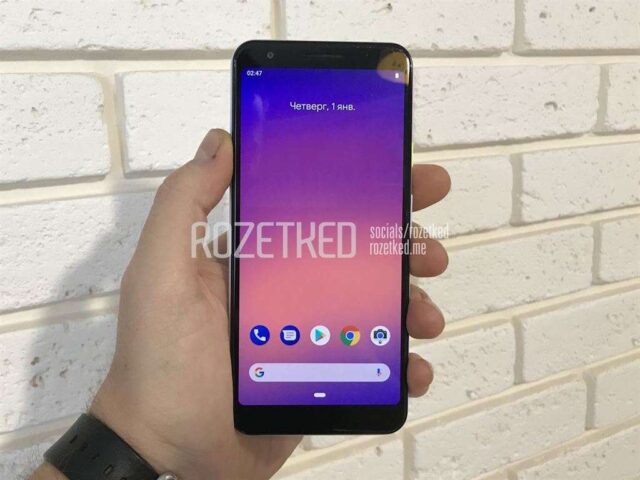 With more and more leaks and reports emerging out, the Google Pixel 3 Lite seems to be reaching the same fate as its elder siblings. After being leaked in images posted by Rozetked blog, the upcoming mid-range Pixel has now appeared in yet another hands-on image where its placed alongside the Pixel 3.

The freshly leaked picture by Ben Geskin – a Russian Leaker, on his Twitter profile showcases the Pixel 3 Lite right next to the Pixel 3, allowing us to compare them both side by side. On looking closely, one can notice the thicker borders on the Lite model. Furthermore, the display is slightly larger and narrow than the latter, fueling the speculations of it to bear a 5.56-inch screen in the 18.5:9 aspect ratio compared to the Pixel 3’s 5.5-inch panel in 18:9 format.

Summing up all the previous reports, the Pixel 3 Lite, code-named as “Sargo” will be powered by Qualcomm Snapdragon 670 SoC along with 4GB of RAM and 32GB of internal storage. We also expect a higher 64GB storage variant.

As for the cameras, it will borrow the same single 12-megapixel shooter from Pixel 3, with clear chances to turn out as the best camera phone in its price segment. On the front, it would have a single 8-megapixel unit compared to Pixel 3 and 3XL’s dual selfie camera.

Interestingly, it is tipped to come with a 2,915mAh battery, similar to the Pixel 3. Previously leaked images also show the presence of headphone jack- an essential that was removed with the Pixel 2.

Moreover, the phone will run the latest Android 9 Pie. However, if reports are to be believed, the Pixel 3 Lite will be reserved for selected developing markets which might disappoint some. Anyways, with the consequent leaks, the device may arrive soon for a price of around $400-500. Stay tuned.