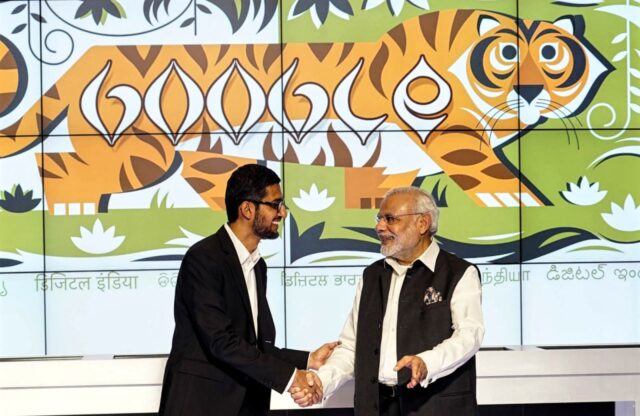 As a consequence of Modi’s visit to Google’s headquarters, Google promises to offer free Wi-Fi to as many as 400 Indian railways stations by the impending year and seems to stand in full support to Modi’s campaign, ‘Digital India’.

Modi, during his visit there was given various demonstrations, one of them being showcasing ghats of Lok Sabha, Varanasi, via Google Earth and other being the presentation on Project Iris to measure the human blood glucose level correctly.

The PM appreciated it all and encouraged Google to come up with various beneficial apps also for general public besides providing some feasible solutions for removing poverty from the nation.

Apart from all this, Indian PM, Narendra Modi at San Jose, reportedly made a statement that he along with his technical team is working to expand Wi-Fi hotspots for public use, not just at airports but also on railway stations now. And over 500 railway stations will be receiving free Wi-Fi services shortly.

Google’s CEO, Mr. Sundar Pichai, although commented that at first his team will be striving hard to make Wi-Fi available to at least 100 busiest stations to allow as many as 10 million travelers to use internet free of cost. And rest other stations will be benefitted too shortly.

According to the recent planning of Indian Railways, it has been decided that out of 500 (initially planned to be 400) stations, Wi-Fi will be introduced to 75 A1 stations by this December end. And a category will receive it later for next year and everything will be done in a phase-wise manner.

As per the speculations, the work of introducing Wi-Fi services at those 75 A1 stations is already in progress, while the other category that is subjected to receive bandwidth from ISRO may take another 2 years approximately for the completion of this project.

Reports from various sources hold that Howrah Rajdhani Express has been provided with free Wi-Fi facility and other select trains such as Shatabdi as well as Duranto might also get themselves registered in this category soon.

Reportedly, the Indian Railways in collaboration with RailTel has till date been successful in providing free Wi-Fi for up to 30 minutes to seven railway stations including New Delhi, Chennai, Bengaluru, Agra, etc.

India-born Google’s CEO, Sundar Pichai, seems to be particularly exalted about the alliance among Google, Indian Railways as well as RailTel to benefit millions of rail passengers on daily basis and claims that Mumbai Central will be the first one to avail from this project.