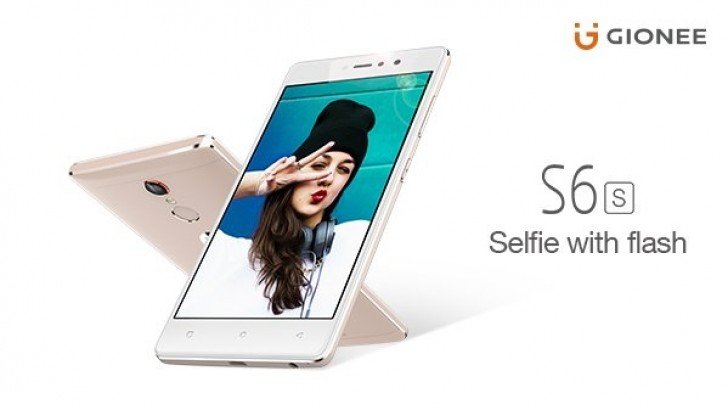 Gionee has launched a selfie-centric Gionee S6s smartphone with a 5.5-inch FHD display and 8MP front-facing camera at Rs. 17,999. The device will be available exclusively via Amazon. The main USP of Gionee S6s is the integration of 8MP front-facing shooter, which has the capability to deliver attractive selfies with a wide range of shooting modes. Gionee has infused special beautification feature to enable you to capture attractive selfies. Although the device will be available on Amazon, the company sources revealed that the handset will also be available from physical retail stores and other e-commerce partners. In addition to a high-resolution front-facing snapper paired with a front-facing flash, the new smartphone looks identical to the Gionee S6, which was launched in November 2015.

Gionee S6s has been designed with a white front panel and a chrome finish rear. You will find SIM slots on the left and power and volume buttons on the right side. The device features a new Gionee logo, which was unveiled at the MWC in Barcelona. On the rear side, you will find a small bump alongside a flash below it.

The rear camera flaunts a 13-megapixel autofocus rear camera with Sony IMX258 sensor, f/2.0 aperture, and a LED flash. The handset also comes with an 8-megapixel fixed-focus front-facing snapper with its own exclusive flash module, f/2.2 aperture and a 5P lens alongside a screen flash support. To add more spice, Gionee has also integrated various shooting modes and beautification feature to enable you to capture rich and compelling selfies.

In addition to a fingerprint sensor, the Gionee S6s also features all major connectivity options such as 4G LTE, 3G, Wi-Fi, Bluetooth, and GPS.

Gionee S6s entered the Indian market when players like Oppo and LeEco have established a base for smartphones in India. The Oppo F1s ships with 13MP rear camera paired with 16MP front-facing shooter. If you look at LeEco Le 2, the handset comes with an advanced Snapdragon processor, 3GB RAM, 32GB storage, 16MP rear camera and 8MP front camera. While Le 2 ships with a 5.5-inch FHD display, the Oppo F1s offers a 5.5-inch HD display.

Earlier, Gionee had launched Marathon M6 and M6 Plus smartphones with massive battery capacity in China. The Gionee Marathon M6 features a 5000mAh battery, while the M6 Plus offers a 6020mAh battery. With 9V/2A dual-charge chip for cooler charging, the M6 also serves as a power bank.