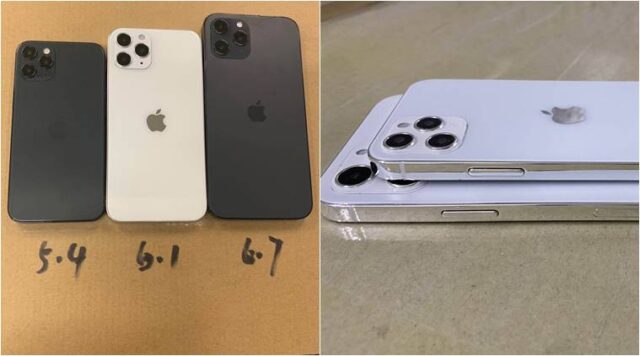 Another set of dummy iPhone models purported to be that of the upcoming iPhone 12 has emerged online. The leak, courtesy of Sonny Dickson, however, has three models to show off, which runs contrary to the four model iPhone 12 line-up that EverythingApplePro claimed will be launched this year by Apple.

According to Dickson, the three iPhone models will have display sizes of 5.4-inch, 6.1-inch, and 6.7-inch for the iPhone 12, iPhone 12 Pro, and the top of the line iPhone 12 Pro Max models respectively. The base 5.4-inch iPhone will, however, be smaller than the iPhone SE currently on sale even though the latter packs in a 4.7-inch panel. That would be possible thanks to the edge to edge display that the iPhone 12 base variant is rumored to have.

Also, the dummy models sort of confirm the flat edged design currently being associated with the iPhone 12. Such a design harks back to the days of the iPhone 5 or iPhone 5s which were the last models to have the boxy shape. Leaks from other sources have also claimed a boxy shape for the iPhone 12 series.

Further, it is going to be a glass back and front design with a metal chassis holding the two sides together. For the base iPhone 12, it is going to be an aluminium chassis while the two Pro models are going to have a stainless steel build for added strength.

Interestingly, all three dummies have shown a triple camera setup at the rear. Dickson, however, did add he might be accurate with the camera prediction as all three models may not have a three-camera setup. Previous rumors on this claimed the starting iPhone 12 to have twin rear cameras while the two Pro models are expected to have triple rear cameras.

A fourth time of flight sensor for the iPhone 12 Pro Max too was being speculated though the same is missing in the dummy unit. What is also noticeable is that the camera bump is identical with the iPhone 11.

Apple is expected to stick to its September launch schedule for new iPhone 12 series in spite of the Covid 19 pandemic.