Home News Foldable iPhone could be much better than Samsung Galaxy Fold! 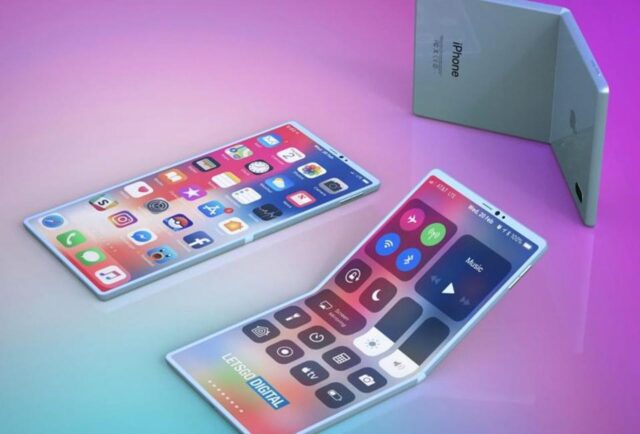 Evidently, no one has been successful in releasing “commercial” folding phones to date. In fact, the failure of Samsung Galaxy Fold further questions the future of foldable smartphones. Now, a new report suggests that Apple could come up with a foldable iPhone anytime soon.

Reported first by CNN, the Cupertino-based company has been awarded a new patent for a foldable screen which is likely to be used in the upcoming iPhones and iPads.

Granted on Tuesday by the US Patent and Trademark Office, the Foldable iPhone patent reveals an electronic device with a display and cover that are flexible and can be bent. Interestingly, the screen shown here can be folded not once but two times. It can either fold inward from each end or bent back on itself i.e. a truly foldable display in my opinion.

How durable will the upcoming foldable iPhone be?

The patent documentation suggests how to manufacture flexible covers so that they work as planned and are durable enough to protect the compliant screen underneath. It’s obvious that the giant will take durability into serious consideration, at least after looking at the fate of the Galaxy Fold.

Here, Apple seems to be focussing on ceramic materials like chemically strengthened glass, sapphire, or zirconia for manufacturing foldable screens. On the contrary, the displays on Galaxy Fold and Huawei Mate X doesn’t use glass at all.

As of now, it’s speculated that the patent designs will not be restricted just to iPhones. Apple may take a step forward to introduce its folding tech into iPad, MacBook, or even an Apple Watch, which will be an unusual thing to see.

For those who are unaware, it’s not the first time Apple has filed for a foldable tech. Notably, the application was filed back in January 2018 while rumours started emerging in 2017 itself. This shows how keen the company has been for next-gen foldable devices.

Talking more of the past, Apple has registered patents for a flexible display with touch sensors and portions that open and close like a notebook. The company has also been successful in securing a license for its foldable phone that incorporates a flexible hinge and uses fabric for housing.

What we can see now is that Samsung has wasted a huge opportunity over quality issues with the Galaxy Fold. Huawei Mate X, on the other hand, has a dubious future as the company itself, due to the raging trade war between USA and China. Therefore, it’d be interesting to see how does Apple deal with this tech and if it’s able to outdo its rivals. Nonetheless, Apple’s take is definitely going to be better than Samsung’s Fold.