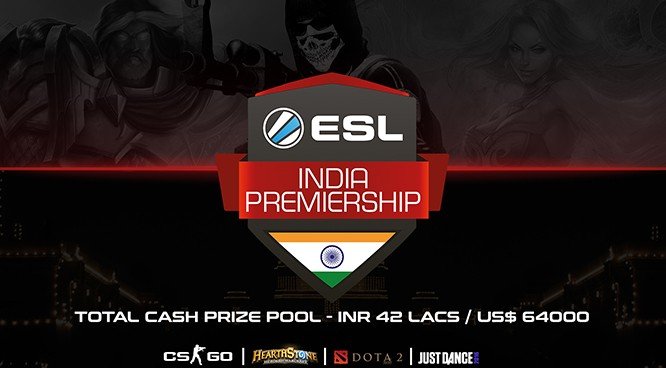 ‘eSports’ winners are considered World famous among enthusiasts as well as followers, however this trend has not picked up in India and we hope to change it’ stated Akshat Rathee- CEO and Director of NODWIN Gaming. The slated ‘ESL India Premiership’ will be the largest of its kind in the entire South Asian region, and will boost the popularity of eSports events in the country as part of ESL’s mission to increase eSports’ acceptance across the Globe.

Participants in the ‘ESL India Premiership’ can sign up for the events as individuals or teams, graduating through the initial stages as ‘Challengers’ or ‘Masters’ based on performance and outcome. While the initial tournaments will put out prize monies of approximately Rs.17 Lacs, the main challenge among the ‘Masters’ at the end of the year will offer up Rs.20 Lacs.

The ‘ESL India Premiership’ will feature the top three Global eSports titles: HearthStone, Dota2 and Counter Strike: Global Offensive among others. It will be the first to introduce India to a real-time dance-off, Just Dance too.

A partnership with video hosting and gaming forum ‘Twitch’ will allow fans and enthusiasts from across the Globe to watch live events every day from 7-10p.m. IST at the Twitch Premiership Channel. The events for the initial cups are slated to begin from the 16th of May 2016. The ‘Challengers’ matches will be held in July and November with the final ‘Masters’ events in December. Be sure you to catch all the action even if you do not participate in the events yourself.