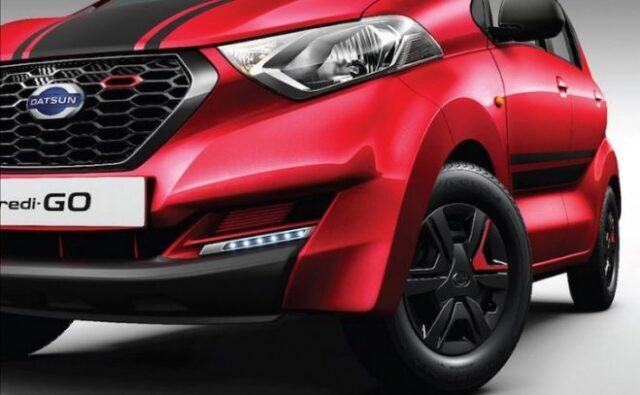 Datsun India has teased an image of the upcoming redi-Go Sport special edition slated for a launch on September 29.

Taking the wraps off the upcoming Datsun redi-Go Sport special edition will be Sakshi Malik, a bronze medalist at Rio 2016 in the 58kg category wrestling. The car is said to get only a top-end S variant. Going by the teaser image, the special edition redi-Go Sport features several cosmetic upgrades such as black racing stripes running along the bonnet and side doors.

Besides, even the lower section of the car’s front bumper gets decked in black, along with black rear view mirrors and wheel caps. All these cosmetic tweaks lend the car a rather interesting aesthetic appeal.

The teaser image, however, does not reveal interiors of the special edition. Though we expect the car to get a brand new cabin upholstery, with black and red combination usually found on Sports variants. There’s also a possibility of new infotainment system in the upcoming special edition variant.

Under the hood, the special edition redi-GO will be powered by the same 798cc three-cylinder petrol engine that produces 53bhp of power and a peak torque of 72Nm. The engine is mated to a five-speed manual gearbox, while the car’s fuel efficiency is touted at 25.17kmpl.

Since it’s launch in June this year, Datsun redi-Go has been quite a success in the Indian market. To recall, the new redi-GO was launched starting at just Rs. 2.38 lakh and goes up to RS. 3.34 lakh (ex-showroom Delhi). It is available in five different variants called – A, D, S, T, T(O) featuring daytime running lamps (DRLs) in the higher-end models. The affordable hatch is said to have the highest ground clearance in its class of cars at 185mm.

The company reportedly sold 2925 units of the red-Go in June, which further increased to 3940 and 3205 units in July and August respectively. Now, they’re looking forward to keeping the momentum going by launching the special edition ahead of the upcoming festive season. The company is yet to announce other key details and pricing of the redi-Go limited edition. We’ll bring you all the details which should be announced at the time of launch on September 29. Till then, keep checking back for more.