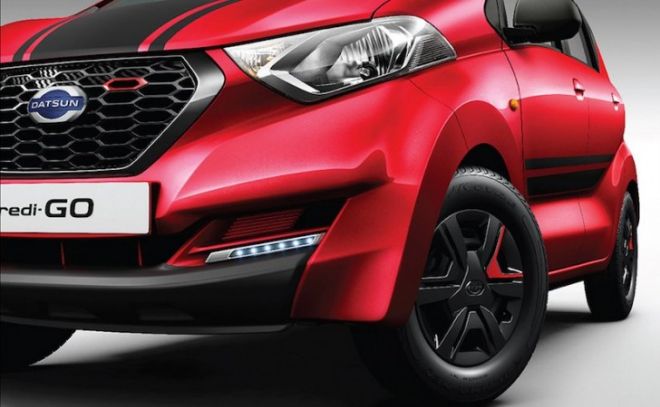 Nissan-owned Datsun has launched a limited edition version of its redi-GO compact hatchback in India. Priced at 3.49 lakh (ex-showroom, Delhi), the limited edition Sport was launched by Olympic medalist Sakshi Malik, who also happens to be the first customer to own the Datsun redi-GO Sport. The car goes on sale exclusively during the upcoming festive season.

The limited edition redi-GO Sport gets a slew of cosmetic changes such as contrasting black stripes running across the bonnet and side doors. Even the lower section of the car’s front bumper gets a black finish, alongside black rear view mirrors, black wheel caps with red accents, along with a black spoiler on the car’s roof. In terms of color options, the redmi-GO limited edition is available in Ruby red, white and grey.

In addition, the redi-GO special edition rocks sporty all black interiors with hints of red on the steering wheel and AC vents. While as far as features go, the special edition redi-GO comes equipped with rear parking sensors, Bluetooth connectivity, and keyless entry.

No changes, however, have been made to the drivetrain. As the special edition red-GO also gets the same 799cc three-cylinder engine that churns out 53 hp of power and 72 Nm of torque. The engine comes mated to a 5-speed manual transmission. While the car’s fuel efficiency certified by ARAI stands at 25.17 kmpl.

To recall, the new redi-GO was launched starting at just Rs. 2.38 lakh and goes up to RS. 3.34 lakh (ex-showroom Delhi). It is available in five different variants called – A, D, S, T, T(O) featuring daytime running lamps (DRLs) in the higher-end models. The affordable hatch is said to have the highest ground clearance in its class of cars at 185mm. The compact hatchback’s direct rivals include the likes of Maruti Alto and Renault Kwid.

Since its launch, the company has reportedly sold 2925 units of the redi-Go in June, which further increased to 3940 and 3205 units in July and August respectively. Now, they’re looking forward to keeping the momentum going with the launch of the special edition redi-GO ahead of the upcoming festive season.