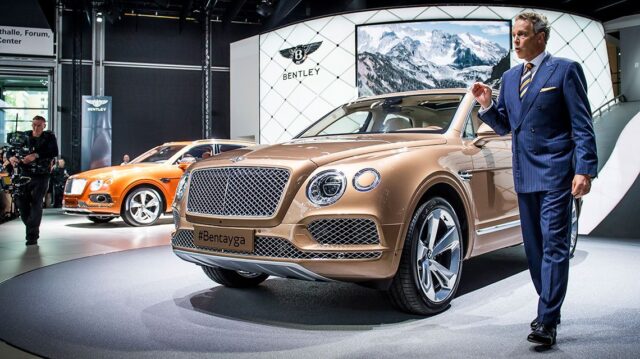 Bentley’s first SUV model Bentayga will be launched in India on April 22, 2016. Bentayga was launched in September 2015 at the Frankfurt Motor Show, and its production kicked off in November 2015. Bentayga is reportedly the fastest and the most powerful SUV yet and the English marque’s first step towards sport utility segment.

Bentayga delivers a top notch power of 600 bhp and produces a torque of 900 Nm from a twin-turbocharged W12 engine which holds a capacity of 6.0 litres. This amount of power is enough to accelerate the car from 0-100 in mere 4.1 seconds. Bentayga hits a top speed of 301 km/h which is far ahead of any SUV has ever made. Porsche Cayenne pulls it up to a maximum of 272 km/h whereas Range Rove Vogue touches a mark of 250 km/h.

Bentayga offers 8 driving assist modes which complement the all-time four-wheel drive on the SUV. Bentley has incorporated 8–speed automatic gear transmission in the Bentayga, which is clubbed along with an all-wheel drive system which ensures smooth acceleration.

Bentley offers its consumers to choose any one of the four veneers Bentayga is embellished with. It has an all leather interior with 15 shades to choose from. Seats in the Bentayga are equipped with air suspension. Soft close doors, powered tailgates, and sunroof with an electric blind are some of the other premium features of the car.

Bentley claims that Bentayga can deliver a mileage of up to 7.6 km/l. It has a fuel tank with a capacity of 85 litres, and the SUV can pull about 200 kilometers before refuelling. Priced at Rs. 4,00,00,000, Bentayga has no rival in its segment until the release of Rolls-Royce Cullinan in 2017.