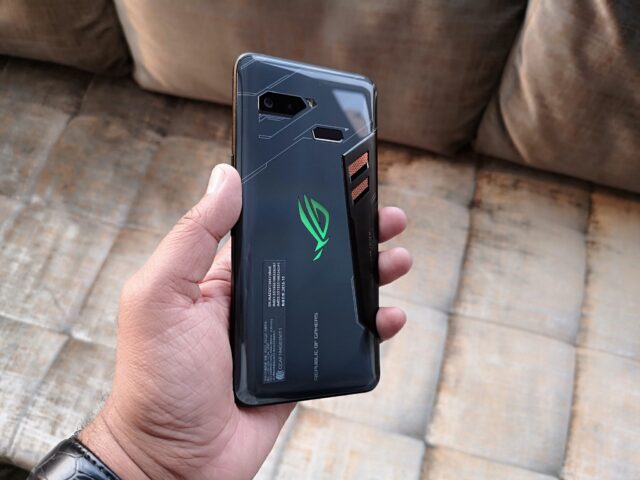 After being unveiled first by Asus’s gaming brand Republic of Gamers (ROG) at Computex 2018 earlier in June, this year, the Asus ROG Phone has now finally arrived in India.

Being the world’s first smartphone with a 3D vapour-chamber cooling system, it primarily focuses on gaming. The phone features a unique design with customizable Aura RGB lighting at the back. Further, it packs in ultrasonic Air Trigger touch sensors and side-mounted ports optimised for landscape-mode.

As for the specs, the Asus ROG Phone comes with a beautiful 6-inch Full-HD+ (1080×2160 pixels) AMOLED display. The display touts a refresh rate of 90Hz and 1ms response time (compared to 4ms on normal displays) with HDR alongside 108.6 per cent DCI-P3 colour gamut coverage and 10000:1 contrast ratio. Additionally, the presence of dual-front firing speakers makes for an immersive gaming experience.

Under the hood, the device gets powered by Qualcomm Snapdragon 845 SoC customised to achieve a maximum clock speed of 2.96GHz, coupled with Adreno 630 GPU optimised for gaming. Furthermore, the phone carries 8GB of RAM and a 128GB of internal storage space.

In the optics department, the Asus ROG Phone gets a dual rear camera setup at the rear. The configuration comprises a 12-megapixel Sony IMX363 sensor with f/1.7 aperture and an 8-megapixel wide angle shooter with a 120-degree field of view. There’s also an 8-megapixel sensor upfront for selfies.

Moreover, the handset runs ROG Gaming UI, based on Android Oreo. Fueling all of this is a massive 4,000mAh battery which is rated to deliver 7 hours of continuous gameplay over WiFi. The phone also supports Quick Charge 3.0 on the bottom port and Quick Charge 4.0 (30W) on the side-mounted port. Asus further claims it to juice up from 0% to 60% within 30 minutes.

The key highlights of the ROG Phone are its GameCool vapour-chamber cooling system, with detachable AeroActive Cooler that aids for extra cooling. There are two programmable ultrasonic Air Triggers along with advanced force-feedback haptics which acts as extra buttons and helps in gaming without the need of touching the display.

Not to forget, there’s also a TwinView Dock that allows for dual-screen gaming and brings in a quad-speaker sound system, two physical trigger buttons, enhanced cooling mechanism and a 6,000mAh power extension.

The Asus ROG Phone has been priced at Rs. 69,999 for the lone 8GB RAM/ 128GB model in India. It’ll be sold exclusively via Flipkart with sales starting today. Launch offers include Flipkart’s Complete Mobile Protection plan for Rs. 999 and No-cost EMI plans for 6,9 and 12 months.