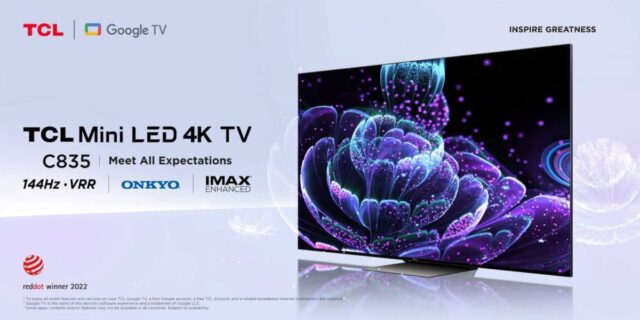 While preparing for a movie night with friends or a solo movie marathon, the ideal atmosphere is the most important thing to consider. So, we start with dimming the lights and blocking external light with curtains because the intervention of unnecessary light flares or reflections can drastically spoil the entire mood. But what if your TV betrays you after going through all these hassles to ensure a dark room? What if it disappoints your expectations to get a refined picture quality that produces deeper blacks and whiter whites? That will surely leave a sour aftertaste for days to come. Fret not!! The all-new Action Cinema TVs are here with everything a movie buff dreams of and more.

Against this backdrop, here are 5 expert’s suggested picks for the best Action Cinema TVs of 2022 integrated with highly-advanced audio and video technology:

Shaking up the Mini LED 4K TV space, TCL has created a benchmark with its latest product innovation, TCL C835. Promising to meet all expectations of end-consumers, TCL C835 is an amalgamation of high-octane features like 144Hz VRR, ONKYO, IMAX Enhanced, Dolby Vision IQ, Dolby Atmos, HDR 10+, MEMC and HDMI 2.1. The device raises the bar of powerful imagery by increasing the number of local dimming zones and offering stunning brightness performance. This results in striking contrast, exquisite details, and more than one billion colours powered by QLED technology.

The Dolby Vision IQ on the TCL Mini LED 4K takes the benefits of Dolby Vision beyond HDR by intelligently optimising the TV for a perfect picture at any given time. Similarly, Dolby Atmos provides immersive entertainment with multidimensional sound and incredible clarity through the TV’s built-in speakers.

The TV also comes with Google TV, ensuring users can go through hundreds of content options aggregated across streaming channels.

The Sony A90J OLED is the best OLED TV for watching movies with a theatre-like experience at home. It’s a superior TV technology with superb picture clarity, especially while watching movies in a dimly lit space. It boasts a modern style that complements the majority of home theatre configurations.

OLEDs are renowned for their capacity to disable individual pixels, resulting in a contrast ratio that is practically unlimited. In the dark, blacks appear dark and inky, and there is also no blooming around bright objects. The A90J supports HDR10 and Dolby Vision for HDR movie viewing, but not HDR10+. It features superb out-of-the-box accuracy, a wide colour range, and excellent gradient management with little banding. Even though it’s not as bright as LED TVs, HDR content still looks spectacular because it gets brighter in HDR than most OLEDs.

Unfortunately, a lower frame rate’s content appears to stutter as each frame is held on for longer due to its short response time. If this troubles you, then Sony A90J OLED’s motion interpolation feature might give you some relief. If OLEDs are subjected to the same static elements over an extended length of time, they run the risk of permanent burn-in. However, this is not a problem if you view a variety of content, like movies.

The LG C1 OLED is the most affordable OLED television in the market for watching movies. Thanks to its nearly infinite contrast ratio, which produces deep, uniform blacks and prevents blooming around bright objects in dark scenes, it offers a picture quality that is quite similar to the Sony A90J. Compared to the Sony TV, it is more affordable, but at the sacrifice of processing speed. Despite the spectacular visuals in most movies, it’s a little less accurate.

On the other hand, if you’re seeking a flexible substitute, it’s a fantastic option. If you have several consoles, it’s terrific because it provides superior gameplay features, such as HDMI 2.1 bandwidth on all four HDMI ports. The TV boasts of additional gaming capabilities, such as support for varied refresh rates and extremely low input lag.

It’s advisable to connect a UHD Blu-ray player directly to your soundbar or home theatre system rather than using the TV’s eARC capability because it does not, sadly, support DTS passthrough.

The Samsung QN43QN90AAFXZA is the ideal TV for viewing movies in a compact space. There is a model for every viewing situation because, unlike most TVs on this list, it comes in sizes as little as 43 inches and as large as 98 inches. This TV makes watching movies in a dimly lit space all the more exciting and lifelike. The blacks are deep and uniform in a dark room thanks to one of the greatest local dimming features on the market, which produces an extraordinarily high contrast with local dimming.

Additionally, especially in HDR, it seems exceptionally brilliant. Bright highlights in HDR shine out incredibly well when combined with its fantastic local dimming capability. Because of its outstanding wide colour range, movies appear vibrant and realistic. If you have a collection of DVD movies, it upscales lower-resolution content nicely. Additionally, the smart interface has an extensive range of apps, making it simple to access your preferred streaming services.

Sadly, because of its relatively fast response time, slow-panning shots in movies can stutter. Motion interpolation is one feature that can lessen stutter, but it also brings other problems, making it a less than ideal solution.

The Hisense U9DG is one of the greatest LED TVs for watching movies in today’s time. It’s a special TV that uses twin cell panel technology and as a result, generates the highest contrast as compared to other LED TVs. It shows profound blacks with almost no blooming around bright objects. It avoids the possibility of irreversible burn-in and has nearly as excellent of an appearance as OLEDs.

Scenes with stars or other little light objects look as they should since it makes bright objects pop out and doesn’t squash any blacks. Although it loses brightness with greater sections of brilliant colours, its overall HDR peak brightness is still sufficient to deliver a superb HDR experience. You can easily stream your preferred HDR content because it also supports HDR10+ and Dolby Vision content.

Customers shouldn’t buy it if they have a restricted amount of room because it is only available in a 75-inch size. Additionally, it is not adaptable for various usage and competitive gaming due to poor response time and low input lag. It is frustrating that the gradient handling is relatively mediocre and that banding can be seen in scenarios with shades of similar hues.