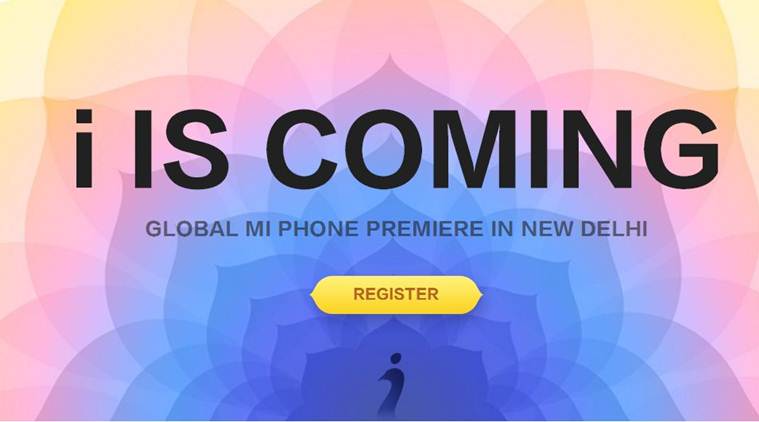 China based mobile manufacturer Xiaomi is all slated to launch its new Smartphone in India in its biggest event in Siri Fort in New Delhi on April 23rd. Xiaomi has put a teaser on its official Indian Website “I is coming”. It is expected that Xiaomi would launch a new version of its Mi 4 Smartphone dubbed as Mi 4i.

This is the first time Xiaomi is holding a grand event in India and unveiling a new phone globally in such event.  Xiaomi’s event would be attended by the top leadership team including CEO and Founder Lei Jun, President & Co-founder Bin Lin and VP Xiaomi Global Hugo Barra.

Xiaomi has also tweeted about this event from its official twitter handle:

i IS COMING. Register for our global Mi phone premiere in New Delhi on 23 April. http://t.co/H8GdKvulca #MiLaunch2015 pic.twitter.com/0pxgSe4Mu0

The Mi 4i Smartphone is expected to be a 64 bit Snapdragon processor, running on Android Lollipop and a 4.9” screen.  As per the specifications leaked from the GFXBench benchmark website the codename of the Phone is dubbed as Mi Ferrari. The Smartphone is rumored to be powered by Qualcomm Snapdragon 615 64-bit Processor with 1.65 GHz clock speed, 2 GB RAM, with 16GB of storage and will run the latest Android 5.0.2 Lollipop.

Mi 4i will sport a 12 MP rear camera and a 4.8 MP front camera.More details about the camera specs are still awaited. Mi 4i will be a phone which will run on 4G LTE network. It is expected that the Smartphone would be priced around Rs 15,000 in India and less than $200 in International market.

Xiaomi has placed India in its global plan and recently has expanded its distribution in India by ending its exclusive arrangement with Flipkart. Xiaomi Smartphones are now available with Amazon and Snapdeal and offline stores of The Mobile Store and Airtel Stores.