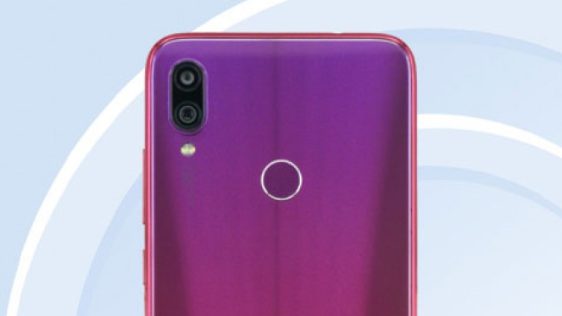 The Xiaomi Redmi 7 was spotted a while back on the Chinese regulatory authority TENAA. Now, the gradient version of the same has appeared on the website alongside the upcoming Redmi Note 7.

The listing reveals some of the key features of the device along with its design. Let’s have a detailed look at both the smartphone listings.

All the three models are identical with regards to the design. The device comes with a glass back that has a purple-pink gradient finish.

Furthermore, it bears a water-drop notch upfront and has dual cameras at the rear. The back panel houses the fingerprint scanner while the power button and volume rockers are placed in the right frame.

As far as the specifications are concerned, the Redmi Note 7 will have a massive 6.3-inch display which seems to have a 19:9 aspect ratio. We can expect a Full-HD+ screen resolution on the same. Lastly, the device will measure 159.2 x 75.2 x 8.1mm and will get its power from a 3,900mAh battery. Note that the handset will be utilising a 5V/2A charger whose model is MDY-09-EK.

The alleged Redmi 7 with model number M1901F9 has also re-appeared in a gradient version. The design looks reminiscent of the Note 7, barring the Mi logo instead of Redmi branding on the former.

The previous TENAA listing hints at a 5.84” LCD panel with Full HD+ resolution and 19:9 ratio, due to the water-drop notch. The device is alleged to get a dual camera setup with a 12 MP sensor as its primary shooter. Whereas, the one at the front will be an 8MP snapper.

While the listing mentions a 12MP shooter, there are rumours of the device to get the Sony’s latest IMX 586 sensor with effective 48-megapixels resolution. The company has previously confirmed the launch of a smartphone with a 48MP resolution. Same is suggested by the latest teaser of the upcoming smartphone from Redmi as an independent brand.

Moreover, rumours also stress at the presence of Qualcomm Snapdragon 675 SoC on the device. The smartphone will be launched on January 10, at an event held in Beijing at 14:00 local time. Stay tuned for further updates.