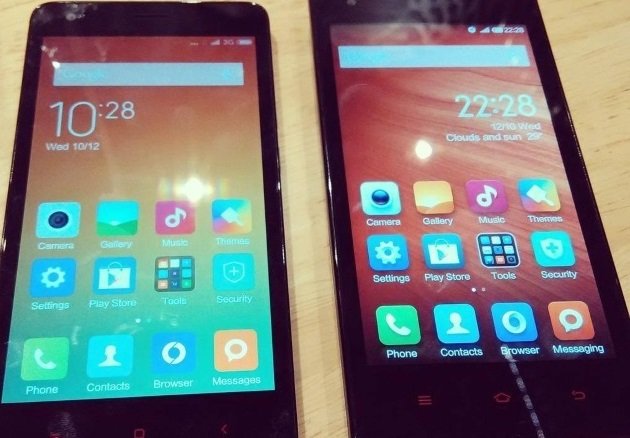 Xiaomi is on a launching-spree this year with Redmi 2, Mi Note, Mi Note Pro, 2GB version of Mi 4 and Mi 4i handsets hurling the markets with a storm.

The ‘Apple of China’ is in the process of manufacturing some more lethal devices as per rumors surfacing on the tech streets.

After the roadmap leak of Xiaomi’s 2015 much talked about Redmi Note Series, last week, the Smartphone company finds itself in a quandary yet again with the rumors of new Mi handsets featuring Snapdragon 808 making the rounds.

The images along with specs of the Redmi note were all over the internet courtesy @upleaks. The note look quite similar to it’s predecessor with model name “H3Y” etched on the back of the metal-made phone.

Codenamed Hermes, this dual-sim wonder is powered by a 64-bit octa-core MediaTek MT6795 chipset, comes with 2GB of RAM, and dual-SIM support.

There is little information about the size of display screen, with leaks hinting at a 5-inch full-HD (1080×1920 pixels) display.

While Xiaomi phones are best known for their picture quality,  this new beast is rumored to be class apart as it comes capacitated with 2 cameras on board-  13MP rear camera (with a Samsung S5K3M2 ISOCELL sensor), and the front-facing 5MP for those in-trend selfies, all thanks to OmniVision OV5670 sensor.

The price range of the phone will be somewhere in between the company’s Redmi and Mi series handsets.

The leaks report that the phone will ship with Android 5.0 (or 5.1) Lollipop out of the box, pre-installed with MIUI 6 on top.

As per the earlier report, however, it was believed that the Redmi Note 2 will take advantage of a 5.5-inch HD display (720p) and a Snapdragon 410 processor.

The company is said to hold an event on May 18, where it will allegedly be launching a range of smart gadgets, a two iteration of their smart TV and even some additional variants of their announced Smartphones.

There is little hope that the company will announce the Redmi phone launch at the event as far as the teasers go.

While the users rejoice by the new specifications and look forward to buying the phone, they should also keep in mind that the leaks legitimacy always remains apocryphal.