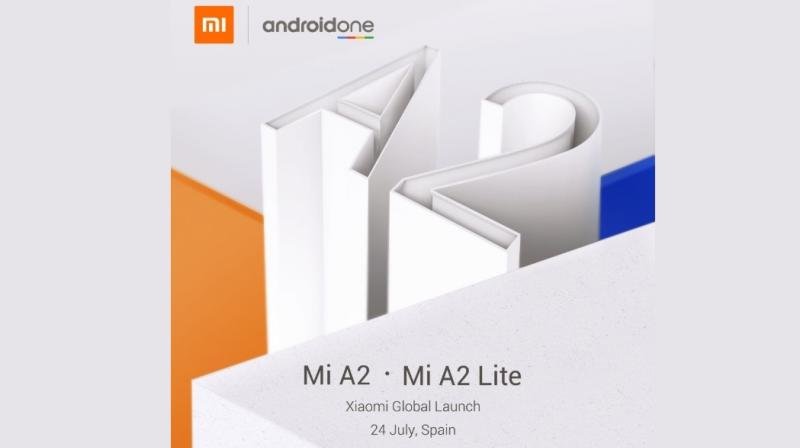 Xiaomi just released a teaser that confirms that the company plans to launch two new Android One smartphones at its global launch event in Spain, to be held on July 24. The teaser confirms that the widely-rumoured Mi A2 will launch at the event, along with a cheaper variant of the handset called the Mi A2 Lite.

The Chinese manufacturer posted a teaser on its official Twitter page, showcasing two smartphones with vertically aligned dual rear cameras. “We are giving you ALL not 1 but 2 smartphones on July 24th! Any guesses? #2isbetterthan1”, wrote Xiaomi in the post which was accompanied by an image. Following this teaser, the company posted another one that confirmed the launch of the aforementioned handsets.

As per leaks, the Mi A2 is expected to feature 12MP+20MP dual rear camera sensors with f/1.75 aperture and LED flash module. For selfies, the device is expected to pack a 20MP front-facing shooter with AI capabilities, along with support for an AI portrait mode. On the other hand, the Mi A2 Lite is rumoured to sport 12MP+5MP primary camera sensors and a 5MP front-facing shooter for selfies.

Under the hood, the Mi A2 is likely to run the Snapdragon 660 processor bundled with upto 4GB of RAM. Elsewhere, the device is expected to feature a 5.99 inch Full HD+ display having an aspect ratio of 18:9. Being a part of Google’ Android One program, the handset is likely to run stock Android 8.1 Oreo out of the box. Juicing up the handset could be a 4000mAh battery.

The Mi A2 Lite, meanwhile, is expected to get powered by Snapdragon 625 processor paired with 4GB of RAM and 64GB of built-in storage. Up front, the device is likely to come with a 5.84-inch Full HD+ display having an aspect ratio of 19:9. Juicing up the handset could be a 3000mAh battery.

In terms of pricing, the Mi A2 is rumoured to cost around Rs 20,000 for the 32GB variant, going upto around Rs 25,600 for its top end model. The Mi A2 Lite, on the other hand, is expected to get a starting price tag of around Rs 13,000. That said, users are advised to take this information with a pinch of salt as nothing is official at the moment. We’ll update you as soon as we hear anything new. Until then, keep checking back for more.