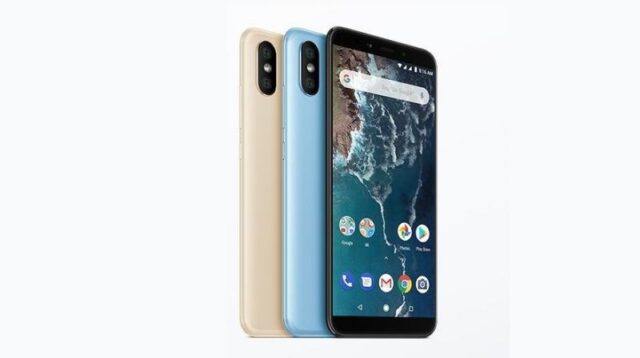 Xiaomi has officially launched its latest Android One smartphones – the Mi and Mi A2 Lite at an event in Spain. Both handsets are a part of Google’s Android One program, which will be available in Black, Blue, and Gold colour options.

In terms of specifications, the Mi A2 features a 5.99-inch having an aspect ratio of 18:9. Under the hood, the device gets powered by Snapdragon 660 octa-core processor bundled with either 4GB or 6GB of RAM, depending upon the variant. The handset is offered in a choice of 32GB, 64GB, 128GB built-in storage variants. The device runs stock Android 8.1 Oreo and gets fuelled by a 3010mAh battery with support for Quick Charge 3.0.

In the camera department, the Mi A2 gets an AI-powered dual rear camera setup, comprising of 12MP+20MP sensors with dual-tone LED flash. For selfies, the device gets a 20MP front-facing shooter with f/1.75 aperture and a soft LED flash. The company also claims the handset’s camera is equipped with features such as AI Portrait Mode, AI scene recognition, AI Background Bokeh, and AI Smart Beauty 4.0.

Connectivity options on the handset include 4G LTE, Bluetooth 5.0, Wi-Fi, Miracast, IR emitter, and microUSB port. However, there’s no 3.5mm jack which is a tad surprising.

The Mi A2 Lite, on the other hand, gets a 5.84-inch full HD+ notched display having an aspect ratio of 19:9. Powering the handset is Snapdragon 625 processor bundled with wither 3GB/4GB RAM and 32GB/64GB of bulti-in storage. The handset also has microSD slot for expanding storage up to 256GB.

In terms of optics, the Mi A2 Lite gets a 12MP+5MP dual-lens primary camera. For selfies, the device gets a 5MP front-facing shooter. The camera is also equipped with features such as AI Scene Recognition and AI Portrait Mode. Connectivity options on the handset include a microUSB port, a 3.5mm jack, Bluetooth 4.2, Wi-Fi, 4G VoLTE, and GPS.