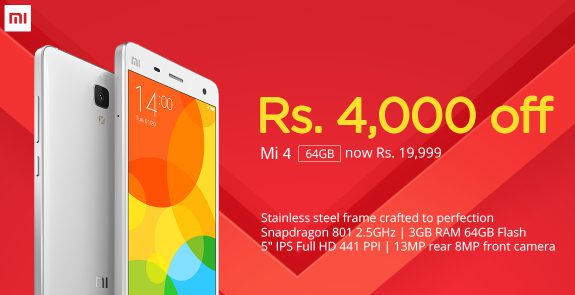 Chinese smartphone manufacturer Xiaomi has once again slashed the prices of its 64 GB Mi 4 version by 4,000 INR. The smartphone will be now available in Flipkart at a rate of 19,999 INR.

This hybrid smartphone was launched in India in February 2015, at a rate of 23,999 INR. Later the company slashed its price on April to 21, 999 INR, and now they have done it again, and this is expected to gear up their sales in the most positive manner.

Xiaomi Mi 4 64 GB is one of the well packed hybrid phones of recent times. But many experts considered its 12 GB usable memory as its major flaw.

With the reduction of price, things are supposed to be fallen in track, and the company expects a sales boom through this move.

The Xiaomi Mi 4 64 GB comes with a 5 inch Full HD Display. The screen has been layered with a Corning Gorilla glass for better protection.

The smartphone powered with a 2.5 GHz quad-core Snapdragon 801 processor has 3GB RAM.

The Mi 4 has a rear camera of 13 MP with LED flash, Sony IMX214 BSI sensor and 4K video recording facilities.

Mi4 is equipped with a front camera of 8mp which makes it the perfect choice for selfie lovers. The smartphone runs on Android 4.4.3 KitKat operational system.