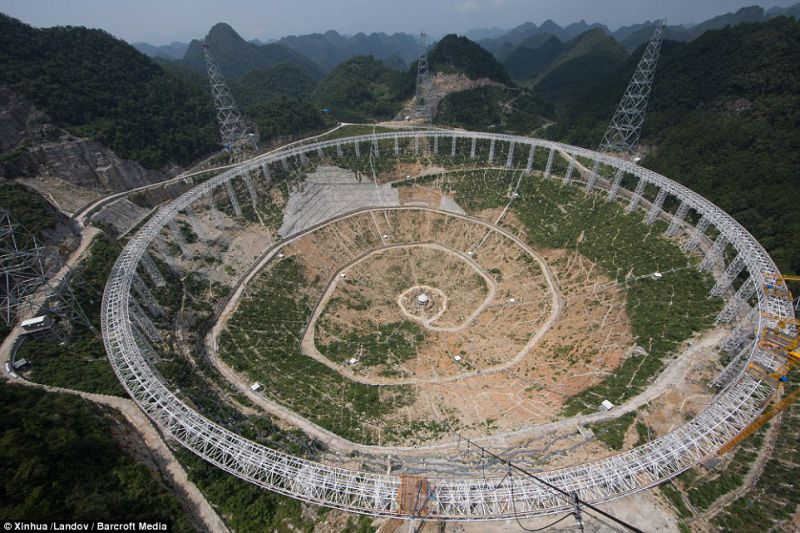 China for sure does not like competition, so to keep it ahead of the game as it has built the world’s biggest radio telescope which will hunt for extraterrestrial life in the space.

Before this, the world’s fastest growing economy was in the news for building the fastest supercomputer in the world. Now again China is in the news for installing the five hundred meter Aperture Spherical Telescope (FAST) in Guizhou the southern province in China. The telescope which took almost five years and incurred a cost of $180 million to build will help in finding the hidden secrets in the universe.

The new telescope FAST stretches to 500 meters and comprises of 4,500 panels, each measure to 11 meters in length. It’s estimated the project reflector will roughly cover around 30 football field area. The design will help in the field of astronomy to understand the world and in hunting aliens. It will collect information through radio waves which are produced from the depths of the universe.

Even though FAST is not the first of its kind organization in search of alien life, there are another body like SETI (Search for ExtraTerrestrial Intelligence) which are also searching for alien life in the space. Besides being the first of its kind telescope, it will help scientists to find information in the formative years of universe and presence of hydrogen in deep space. The telescope will also search for stars and detect gravitational waves.

In comparison to the current telescope, FAST promises to be ten times better than them as it will see the distant and darker planets. However to install this plant, about 9,000 people were dislocated from their current staying place to other areas.

For now, the Chinese government has announced that the telescope will start running from September once all the adjustment are made in the trail run. Once it goes online, all the data collected will be shared by scientists around the world.