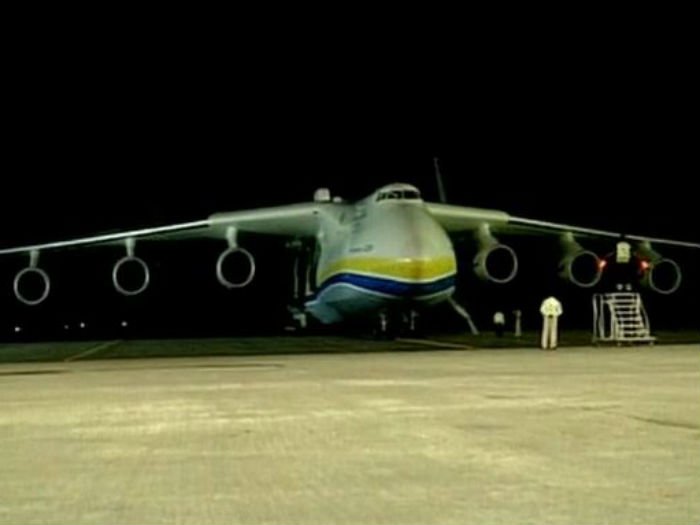 Rajiv Gandhi International Airport at Hyderabad witnessed the first ever landing of world largest cargo aeroplane, Antonov AN-225 Mriya earlier this morning. The plane had to take a technical halt in between as it was flying from Europe to Australia.

The gigantic Mriya (Dream) is the first of its kind which is built by Russia. The longest and the heaviest plane can carry a weight of 640 tonnes. As of now the six-engine aircraft was carrying a generator that weighs 116 tonnes.

Antonov AN-225 was first designed and constructed during 1984-1988. Earlier the main task of the plane was the transportation of various part of Energia carrier rocket and Buran Space Ship. But to keep it updated with the current time, up gradation and modernization of the plane started in 2000.

The aircraft is not only being used for commercial purpose but has also played a critical role in the time of humanitarian need. In October 2009, Mriya performed to deliver generators to Samoa. It transported large size construction machinery in February 2010 when an earthquake struck in Haiti.

In comparison to Airbus-380, which can carry 157 tonnes, AN-225 can carry up to 250 tonnes of cargo. If we compare this with our Indian Air Force operated Boeing C-17, which is built to carry only 80 tonnes. It does look like a minuscule amount. But the Indian Air Force does have a very close contact with Mriya’s manufacturer as it has operated many tactical means of transport for the same.

The landing of Mriya on Indian soil is a positive sign as just last month Reliance Defence led by Anil Ambani signed a strategic pact with ANtonic Company of Ukraine. The fact addressed the issue of maintenance and repair of both commercial and military platforms in India.

Also, India has invested around $35,000 crore in acquiring 200 medium lift turbofan aircraft which will provide a support base for air-force and military force of the country.