Microsoft is working on three new versions of Windows 10, one of them is internally called Windows 10 Pro for Workstation PCs. As the name suggests, this version of the OS is designed to meet the demands of big enterprises. Now, leaked screenshots of Windows 10 Pro for Workstation PCs have surfaced online, revealing some of its key features which are tailor-made for large scale enterprises.

Microsoft is yet to decide as to what they’ll call this version before its final SKU release to customers. But what we know so far is that this version of Windows 10 comes with support for server grade hardware to meet the demands of critical and processor intensive tasks. 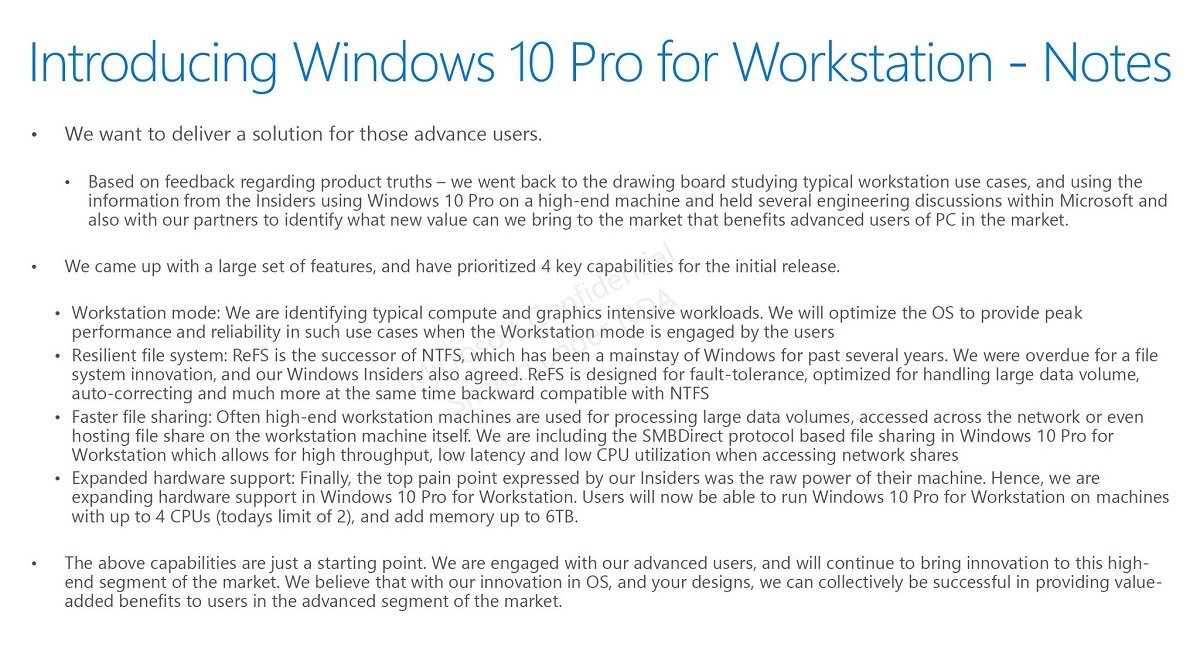 Besides, Windows 10 Pro for Advanced PCs will also support ReFS file system, the next version of the popular NTFS file system. Microsoft explains that the new file system is designed to negate instances of glitches and large volumes of data.

In addition, there’s also support for a faster file sharing system thanks to SMBDirect, which reduces latency and CPU workload during network access shares.

Not to forget, there’ll also be extended hardware support. Enterprise users will be able to run Windows 10 Pro for Workstation on machines connected with up to 4 CPUs. Also, they can increase memory to up to a whopping 6TB.

Microsoft says apart from these four major features, more capabilities will also be added in the future to improve the OS. However, nothing is official yet as far as its SKU release is concerned. That said, there are chances it could arrive with upcoming Fall Creators Update in September.

Besides, Microsoft is also working on two other versions of Windows 10 that could arrive with the Fall Creators update. The two other versions are Windows 10 Pro N for advanced PCs and Windows Server 2016 Serverrdsh. The N version will likely be targeted at the European markets so as to comply with the region’s regulations.

Finally, Windows Server 2016 ServerRsdh is likely designed to work in a virtual environment, where servers are integrated with a Remote Desktop Session Host which act as servers. Details obviously remain slim for now, but the upcoming Windows 10 Build which goes live this week should give us a better idea of these new versions of the OS.