Home News WhatsApp for Android with Voice Calling feature now available for all on... 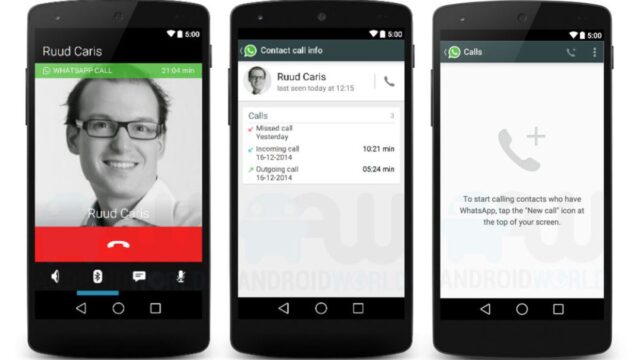 The new version of WhatsApp that offers Voice Calling feature is now available to download or update via Google Play Store for all Android users worldwide. The update is still pending for iPhone users till now, but it’s expected to be rolled-out very soon on iOS platform as well.

WhatsApp gives off an impression of being quietly rolling voice calling for all Android users, regardless of an initial requirement of the invite call. A few reports say that the most recent version of WhatsApp on Google Play accompanies the new calling feature. However, it may not be readily accessible for all of them just yet.

WhatApp had begun taking off voice calling feature for all earlier. Nonetheless, the voice calling activation didn’t successfully reach out to most of the users and looked like invites were already shared amongst almost everyone. In reality, not many users turned out to be the early adopters of the feature. However, WhatsApp users in India have today begun accepting the WhatsApp voice feature without the requirement for any invite.

In the event that you’ve haven’t got the WhatApp voice calling feature activated yet, then this is what you have to do. First, download WhatsApp version 2.11.528 from the Play Store or version 2.11.531 directly from the WhatsApp website. When you have the most recent version of WhatsApp installed on your device, voice-calling can be initiated by getting a call from somebody whose voice-calling is already activated.

WhatsApp leads the way in digital accessibility in India- the only...