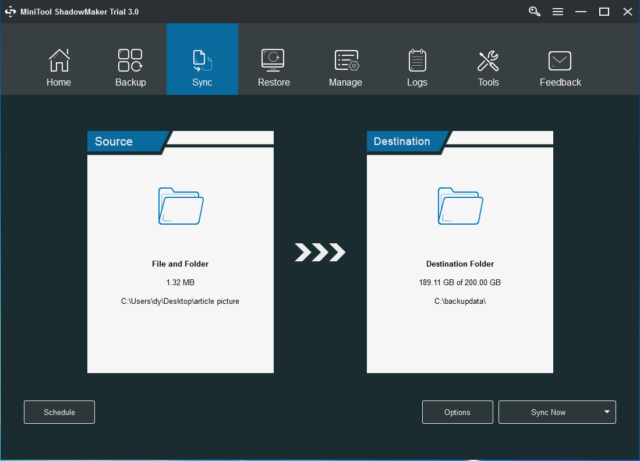 Data loss always is a painful thing since it is difficult to find them back and the cost to recover the lost data is always high. So in order to minimize the risk of data loss, creating a backup image would be a good choice.

Thus, to create a backup image and keep data safe, the PC backup software – MiniTool ShadowMaker has been the choice of many computer users.

And recently, the professional backup software – MiniTool ShadowMaker comes to version 3.0 and some improvements of this version have been made.

MiniTool ShadowMaker 3.0 has increased the feature of File Sync, which can help users to synchronize files and folders to two or more locations, such as external hard drives, USB drives and so on. In this way, users can provide further protection for their data.

MiniTool ShadowMaker 3.0 has increased the backup destination choice so that you can save your backup files to other computers as long as they are in the same LAN.

Restore feature is an important feature of MiniTool ShadowMaker. And fixing bugs of file restore can enable you to restore the backup files successfully.

And obviously, adding file synchronize is a big change of MiniTool ShadowMaker 3.0. As a backup tool, its backup feature is also powerful.

MiniTool ShadowMaker enables users to backup Windows OS, files and folders, disks and partition. And here, we need to point out that backing up the operating system is a very helpful and useful feature since it can keep the computer safe. In addition, the system backup image can be used to restore the computer to an earlier date when some accidents happen.

The backup software also has another important feature – Restore. This feature can be used to provide some recovery solutions when some accidents occur. For example, when the System Restore can’t work or System Restore could not access a file, this feature of MiniTool ShadowMaker plays an important role.

MiniTool ShadowMaker has the ability to handle periodic backup tasks with the Schedule feature so that it can protect PC and data well. And there are three backup schemes to be chosen, including Incremental backup, Full backup, and Differential backup. They can help you to manage disk space by deleting previous backup versions.

Besides the backup and restore feature, MiniTool ShadowMaker also has a lot of tools, such as Disk Clone, Media Builder and so on.

As for the Disk Clone, it is significant for upgrading hard drives. In this way, users can migrate OS to the new SSD without reinstalling the operating system. It is an easy and time-saving way.