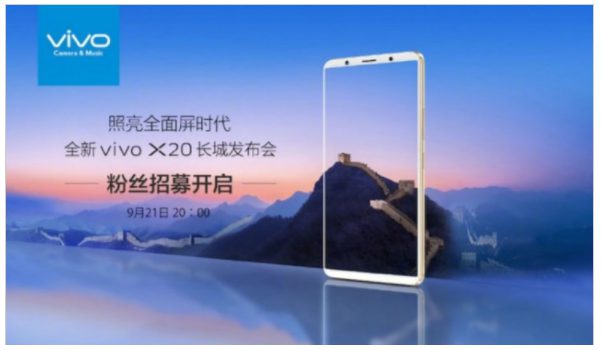 After launching V7+ in Indian market recently, Vivo is now all set to announced the next mid range smartphones, X20 and X20 Plus in China on September 21. The company has already started sending the press invites for the event. The press image suggests that the X series smartphones will be equipped with bezel-less display same as in V7+ handset. But X20 handset is expected to be priced higher than a V7+ smartphone, so it likely packs dual camera modules at the back.

The TENNA site suggests that both the smartphone will be equipped with 5.2 and 5.5 inches Full HD Full View display respectively and are expected to be powered by Qualcomm Snapdragon 625 chipset paired with 6GB of RAM. On the camera front, both handsets will be packed with a 24MP selfie shooter and dual optics setup at the rear.

The Vivo X series smartphone is likely to runs on Android 7.1.1 Nougat operating system and may be fuelled by 3500mAh Li-ion battery. The leaked images of the Vivo X20 indicate that the handset was sports with an 18:9 Full View panel at the front. While at the back the smartphone adheres dual camera set up with LED flash and a fingerprint sensor adjacent to Vivo branding.

To recall, Vivo has launched the V7+ smartphone in Indian market recently. The smartphone is equipped with 5.99 inches HD+ Full view display and Snapdragon 450 SoC paired with 4GB RAM. On the optics front, the V7+ is packed with a 24MP front shooter and 16MP rear camera. The smartphone runs on Android 7.1.1 Nougat operating system and fuelled by 3225mAh battery.