The Vivo V9 is the company’s latest offering in the sub-25K price bracket. The handset happens to be the Vivo’s first phone having an aspect ratio of 19:9. Also, it adopts a trend we’ve been seeing off-late – an iPhone X-like notch on top of the display. And much like past Vivo launches, the Vivo V9 is also all about selfies. The handset has a 24MP wide-angle selfie camera which is equipped with AI Face Beauty technology. Vivo claims the feature takes the selfie game to another level. I’ve been using the handset for a week now. Let’s see whether the Vivo V9 delivers on its promises or not in our review? 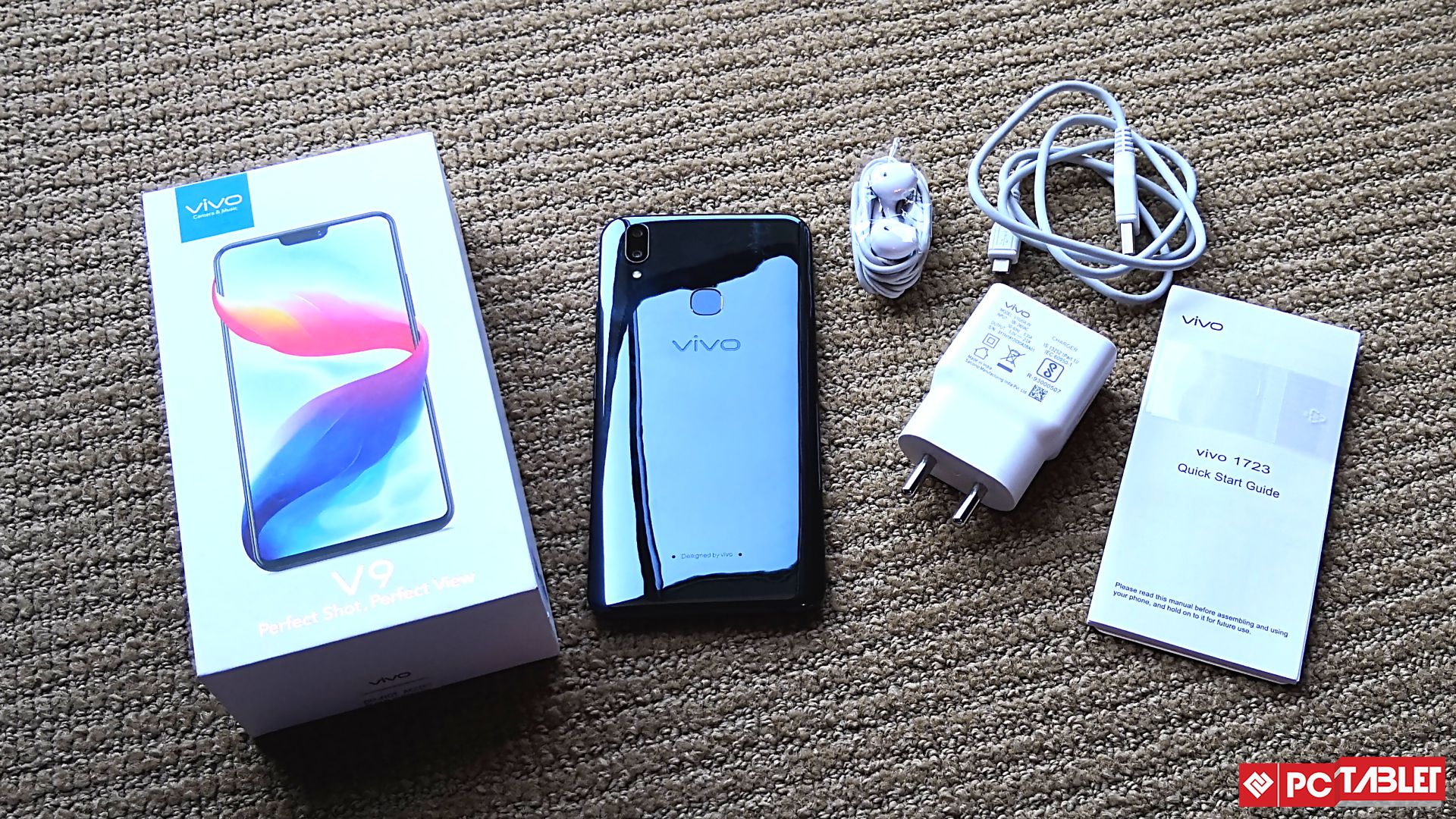 The Vivo V9 looks like another Android phone trying to copy the iPhone X. The handset features a nearly bezel-less design with a notch on top, just like the iPhone X. It also sports a vertically arranged dual-lens camera setup on the back. In fact, it looks ridiculously similar to the iPhone X. But if you can get past the handset’s unoriginal design, the Vivo V9 is a well-built device. 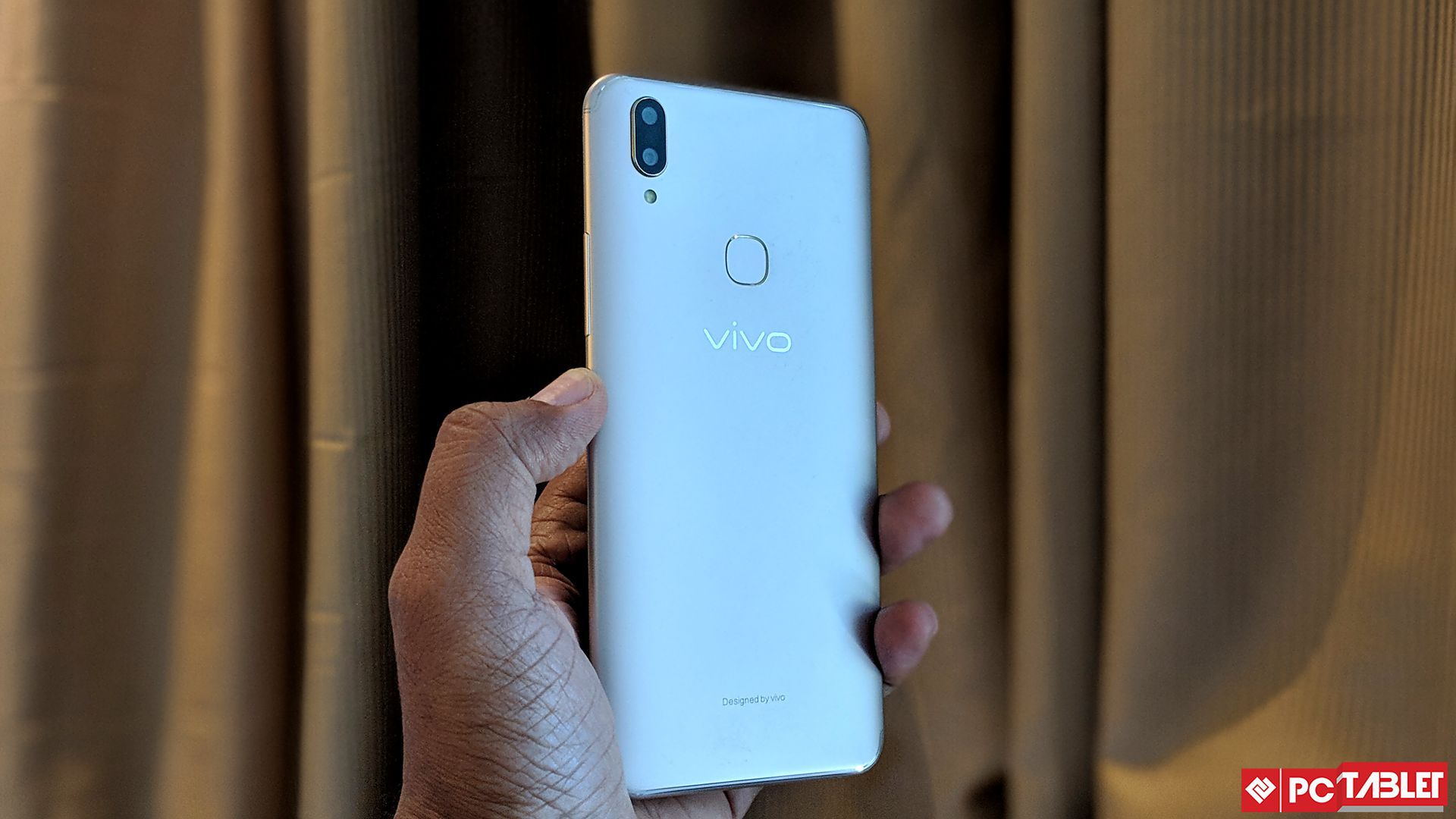 The handset sports a sleek, minimalist design with subtly curved edges. Besides, it features a unibody design that gives it a premium look and feel. And despite the rather massive 6.3-inch screen size, the handset is completely manageable for one-handed usage. 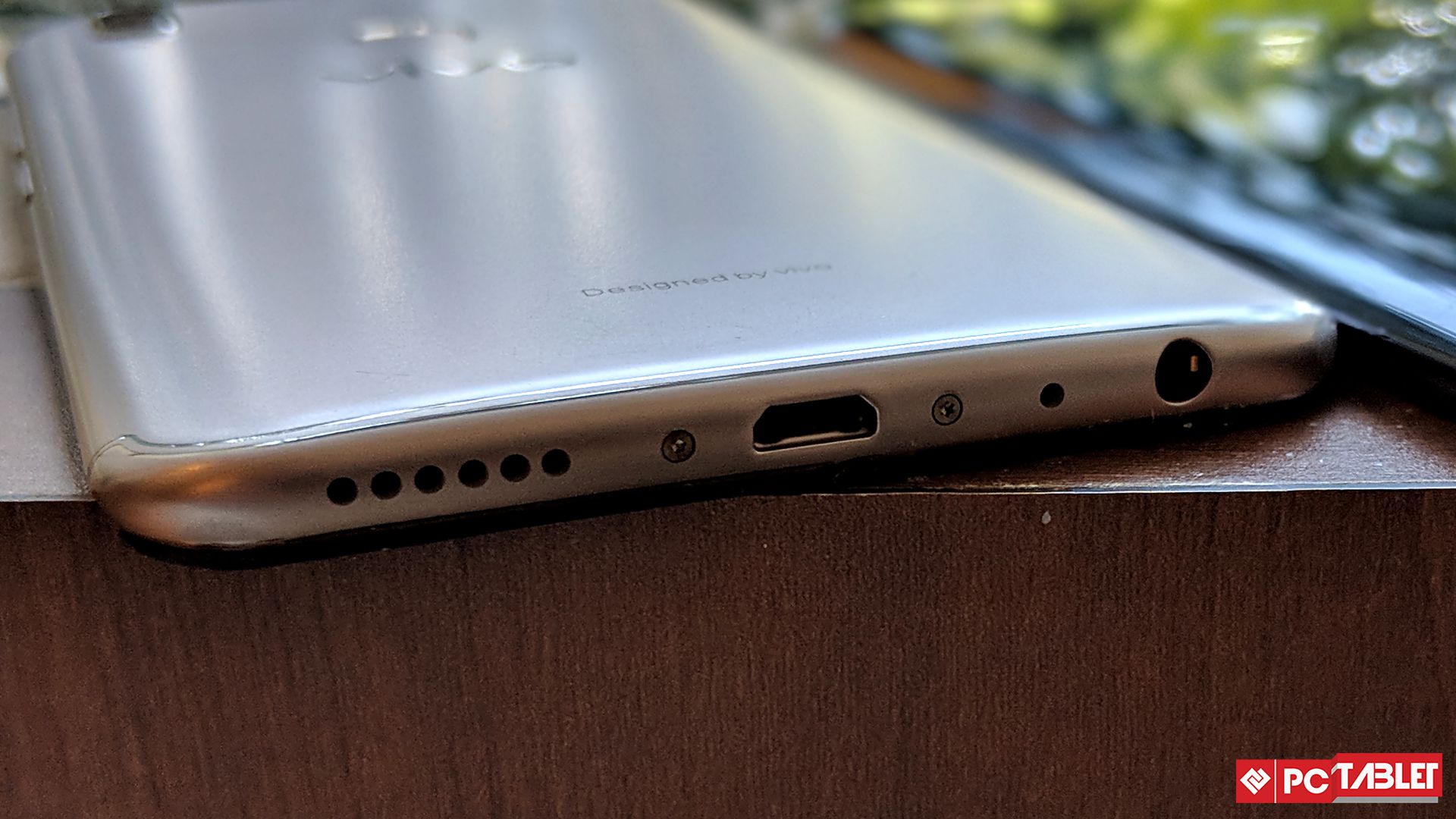 The shiny back of the phone shows off the Vivo logo along with the vertically-stacked dual-camera setup and the fingerprint sensor. While most users won’t mind the shiny back as it makes the handset feel premium, however, the shiny back also seems prone to scratches and smudges after a few months of usage.

As already mentioned, the Vivo V9 is the company’s first handset to feature a 19:9 aspect ratio display. The handset sports 6.3-inch Full View IPS display having a resolution of 2280×1080 pixels. The display also comes with Corning Gorilla Glass 5 protection. 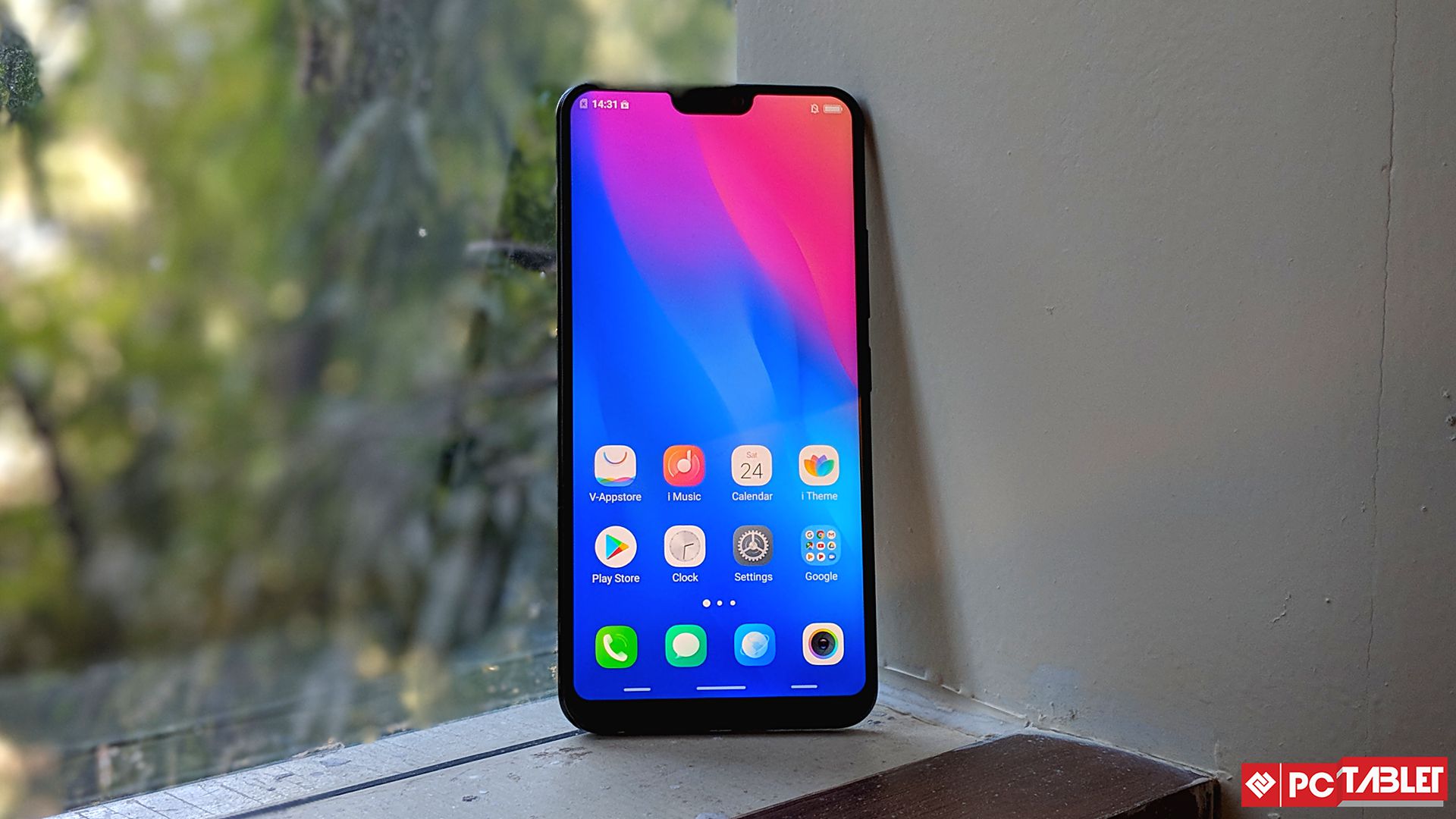 The Vivo V9 has an edge to edge or near-borderless display, which is fast becoming the new industry norm. As far as the viewing experience goes, I found the display sharp and vivid. Colors look just about accurate, the viewing angle is impressive, and the screen has enough brightness to handle direct sunlight. That said, I found colors a tad oversaturated but not to the point that it becomes bothersome.

Overall, I found the Vivo V9’s display rather ideal for binge-watching your favorite TV shows, watching YouTube videos, or to play high-end games. I tried using several apps and a couple of games and found that some of them were natively able to run at the screen’s 18:9 aspect ratio. Apps that were not compatible were automatically downgraded to the standard 16:9 aspect ratio. 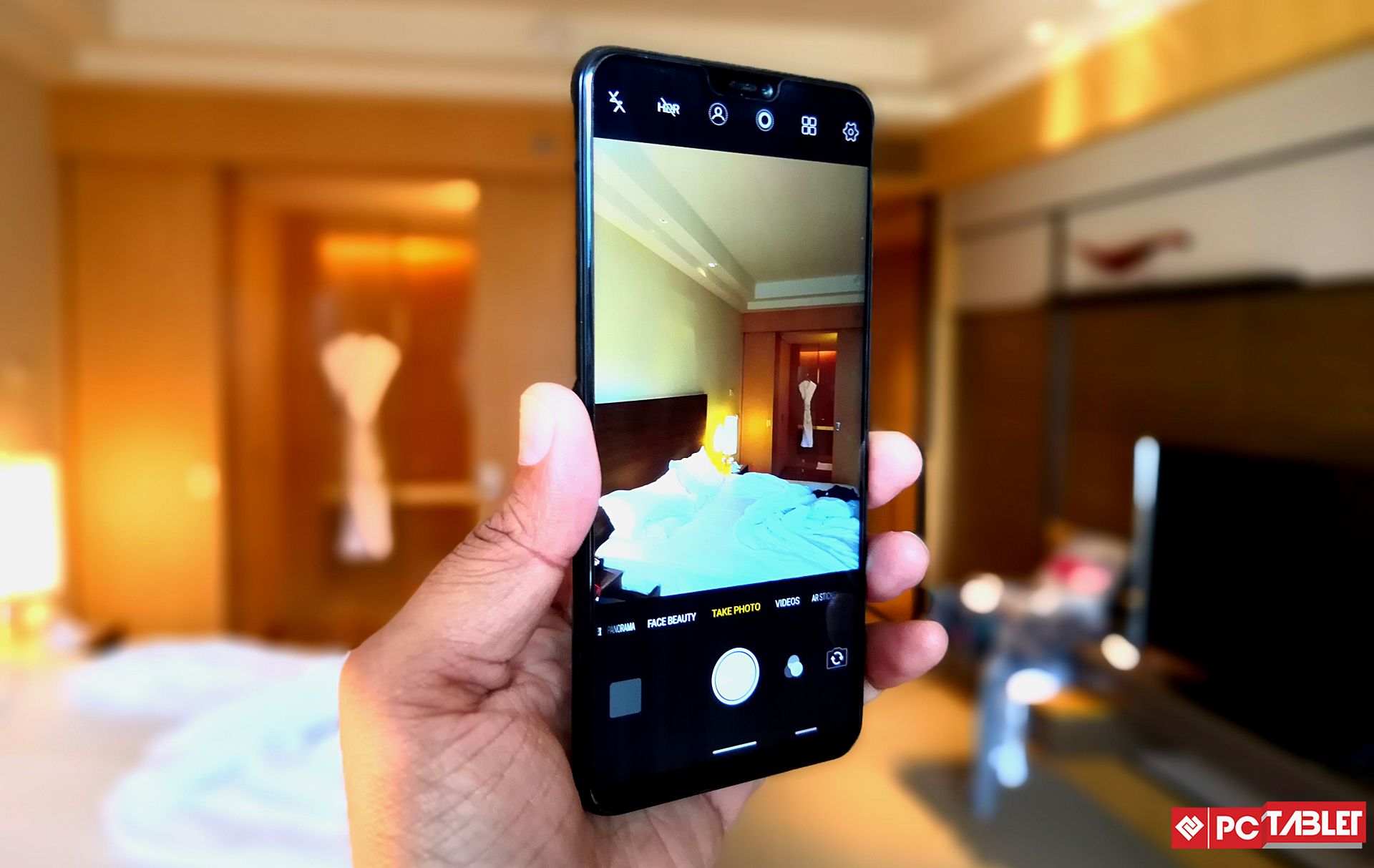 The highlight of the phone, of course, is the 24MP front-facing shooter equipped with AI face beauty which Vivo asserts takes the selfies game to a whole new level. Vivo calls it “A.I. Face Beauty,” but while the V9’s beautifying mode does work, I couldn’t feel a substantial difference compared to beautifying modes found in handsets from Huawei and Xiaomi. That said, the Vivo V9 is totally capable of belting out sharp and detailed selfies.

In ideal lighting conditions, selfies came out real crisp with plenty of details to gawk at. Selfie aficionados can also use the Face Beauty shooting mode which helps soften black spots and acne. Besides, there are plenty of options to tinker with your selfies with AR stickers, filters, backgrounds, and so on. 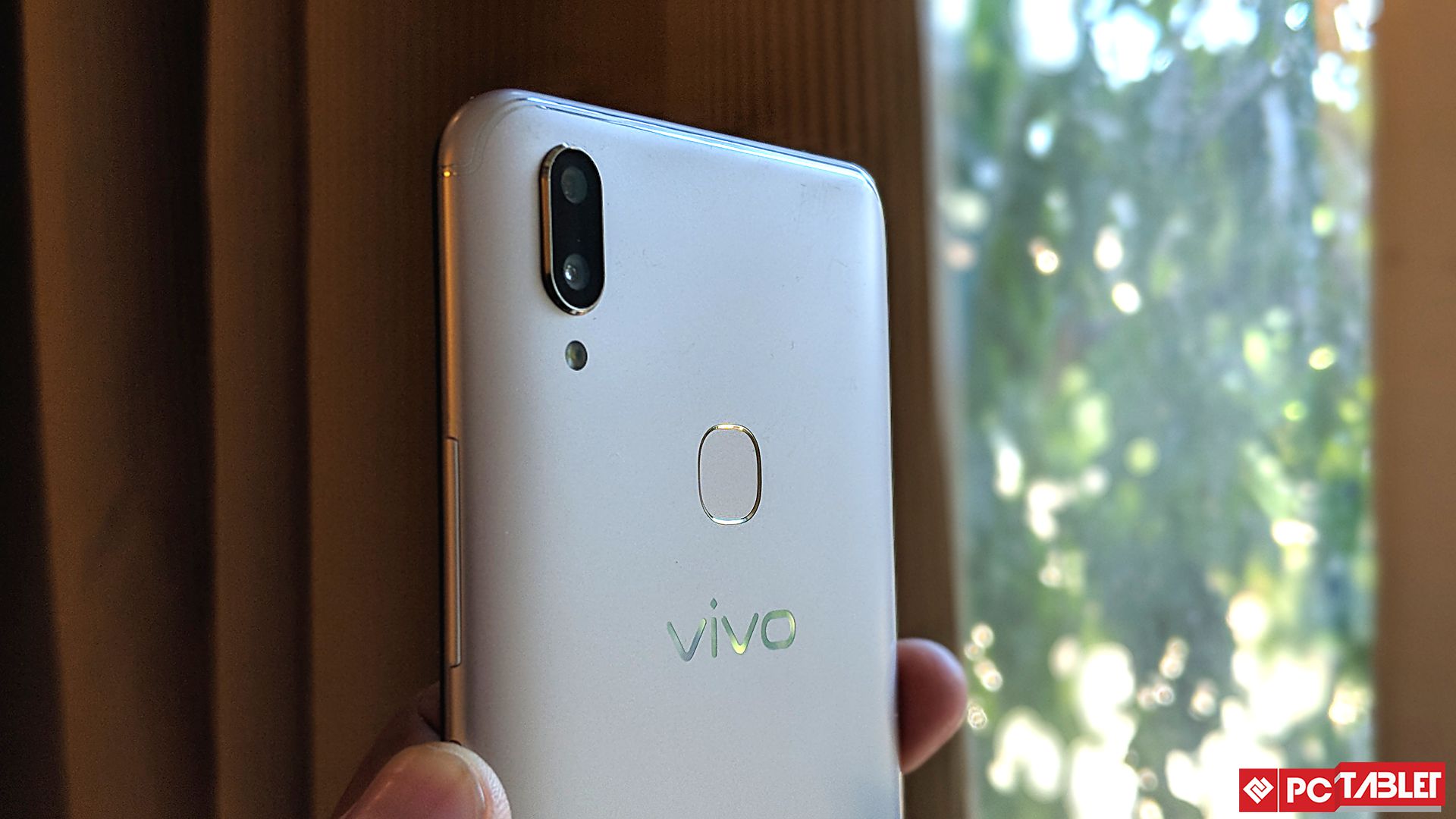 Even the handset’s 16MP+5MP dual lens camera is no slouch either. Daylight shots looked fantastic with plenty of details and sharpness. Shots captured in low-light also came out fairly detailed and sharp, but some shots had noise and blurriness in the background.

That said, both front and rear cameras on the Vivo V9 are very capable performers, especially for a mid-range device. The handset also offers a feature called Live Photo, which records some footage before and after taking a shot – a feature we initially saw on the iPhone 6S. 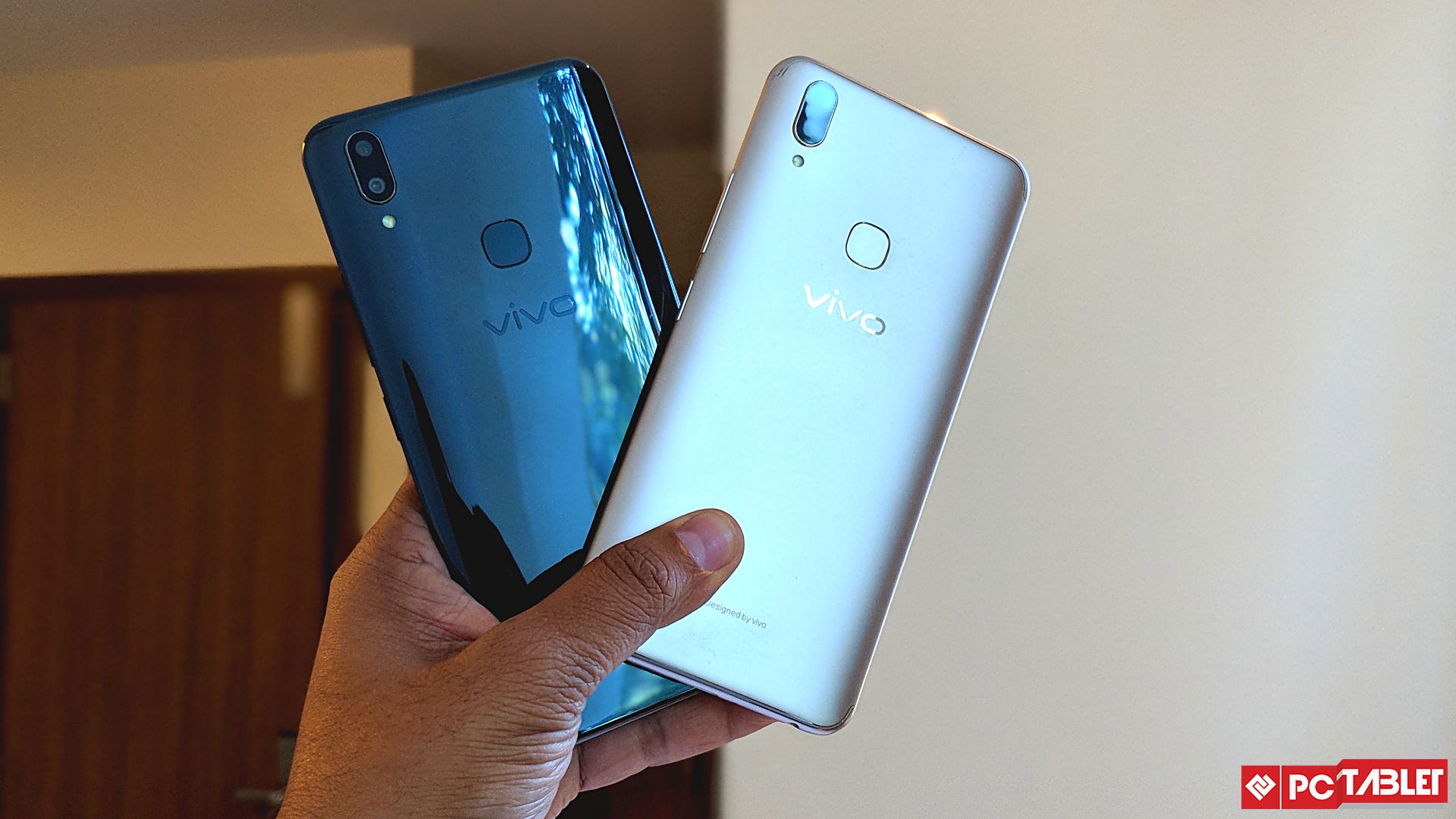 The Vivo V9 gets powered by a 2.2GHz octa-core Qualcomm Snapdragon 626 processor bundled with 4GB of RAM and Adreno 506 GPU. It comes with 64 GB of internal storage which is further expandable via microSD slot. As far as day to performance goes, I did not come across any noticeable lags or stutters. Apps and web pages load quickly and I did not face any issues any issues while trying to juggle multiple applications. It even runs high-end games without much difficulty. Overall, I found the Vivo V9 to a be rather capable daily performer and did not face any issues throughout the long days of continuous usage.

Elsewhere, the Vivo V9 comes with a 3260mAh battery which easily churns out more than a day of moderate usage. I was able to get an-on screen time for nearly five hours, with enough juice remaining to get me through the entire day. The device does not come with the latest USB-Type C standard. Instead, it gets the old micro USB standard. And with the charger that comes bundled with the smartphone, you can get about 40% juice in about an hour. Fully charging the device takes nearly two hours. 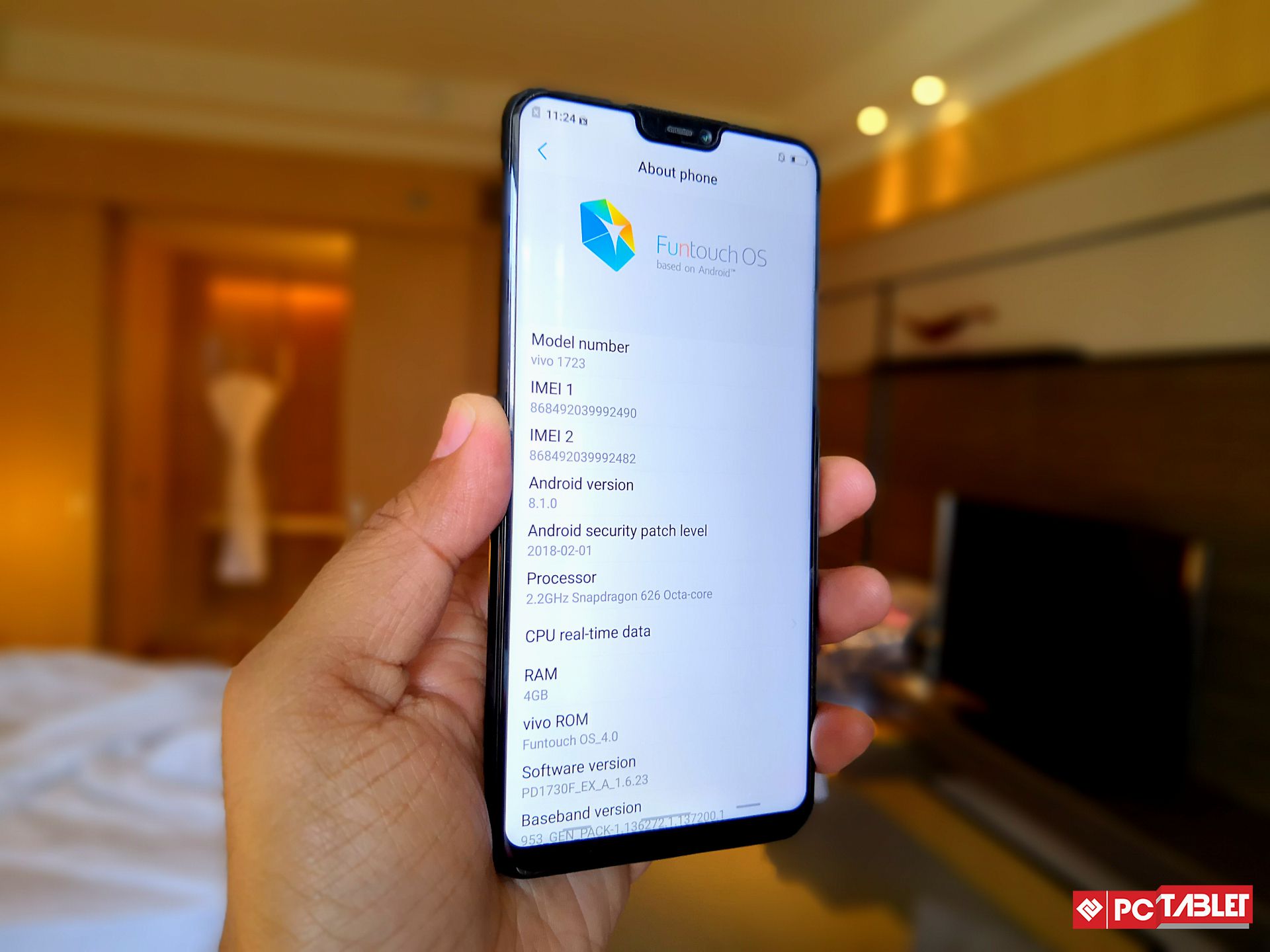 In terms of software, the Vivo V9 runs on Android 8.1 Oreo with Vivo’s proprietary Funtouch OS 4.0 on top. The UI is heavily inspired by iOS, with similar shortcut toggle menus right down to the style of the default app icons. Vivo has also added gesture navigation, much like the iPhone X. You can swipe upwards from the bottom of the screen to go back or stop in the middle to show the app switcher.

And as is typically the case with Vivo phones, the Vivo V9 also comes pre-installed with several bloatware apps, and all of them blasted on the home screen as there’s no app tray. Navigating around the OS felt smooth and lag-free. That said, Android purists would certainly prefer that clean, minimalist look and feel of stock Android which sadly isn’t the case with the Vivo V9. 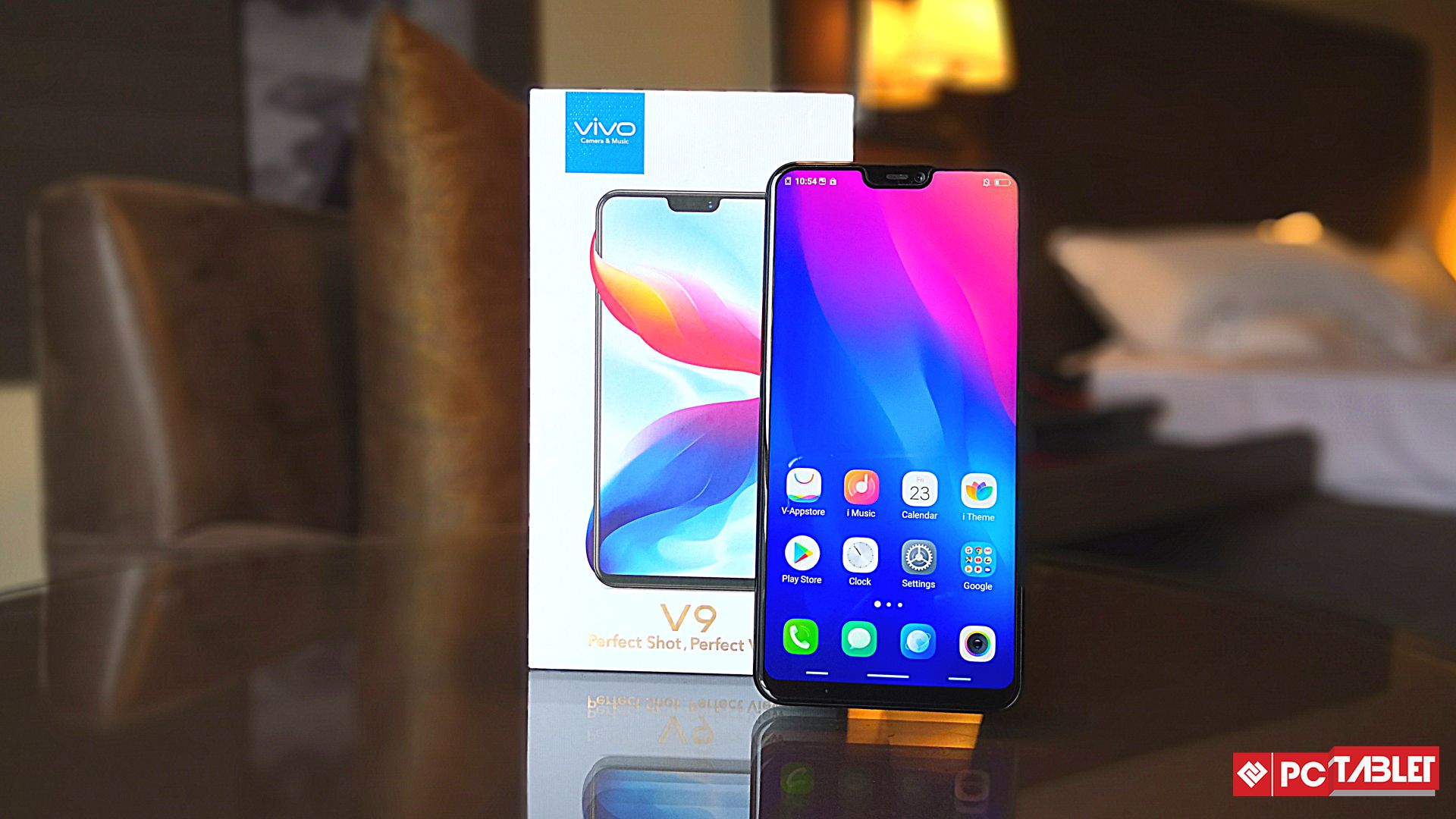 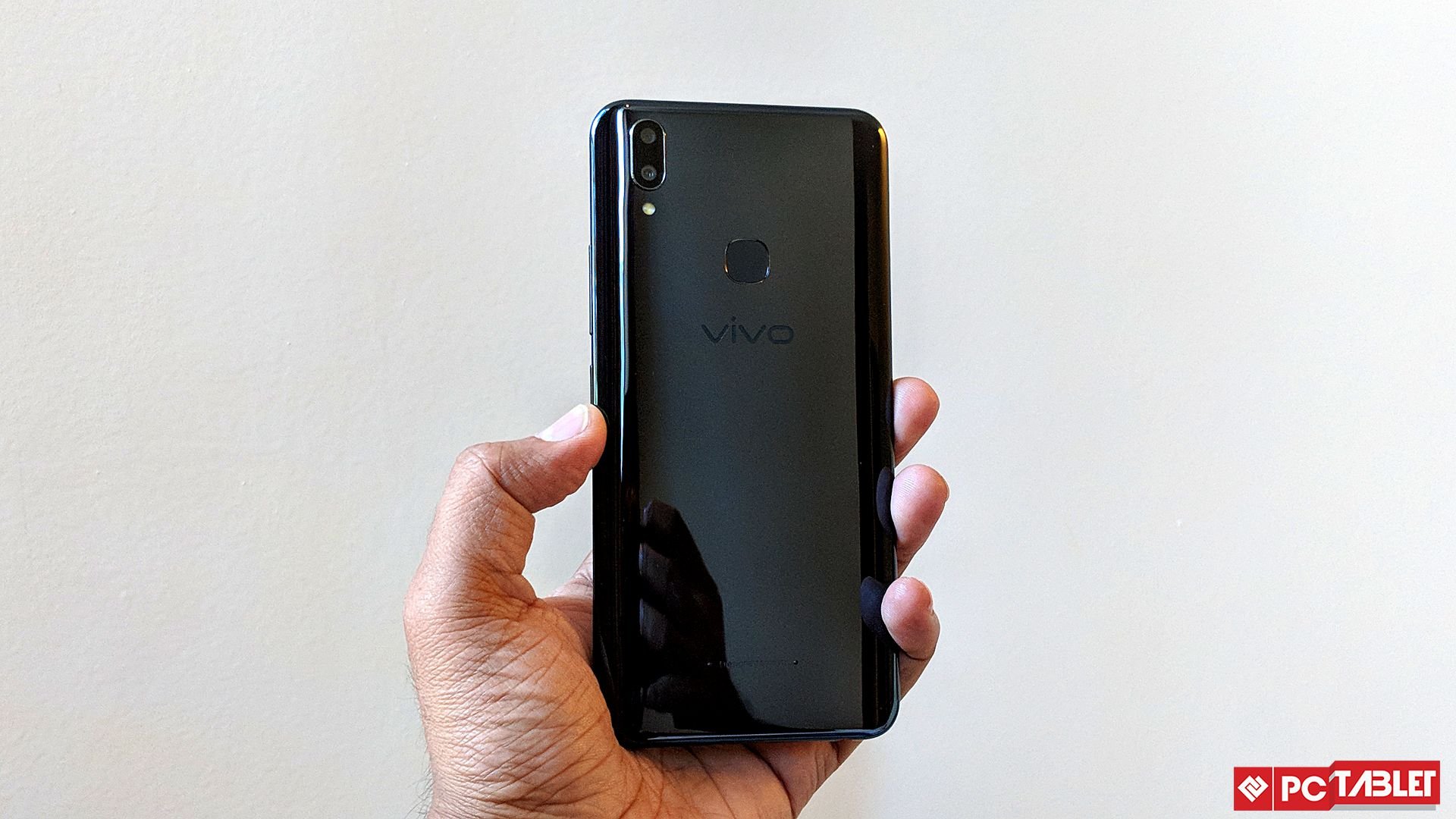 The Vivo V9 may not be the most powerful phone in the sub-25K price bracket, but I’d say it’s a well-balanced phone. Thanks to the Qualcomm Snapdragon 626 SoC and 4GB RAM, the handset’s innards are solid enough to get through everyday tasks at ease. Besides, the Vivo V9 looks sleek and well built, has a decent battery life and offers one of the best cameras we have seen in this price range. What more could you want in a phone that costs less than 25K? For the price of INR 22,990, the Vivo V9 is a value-packed device.