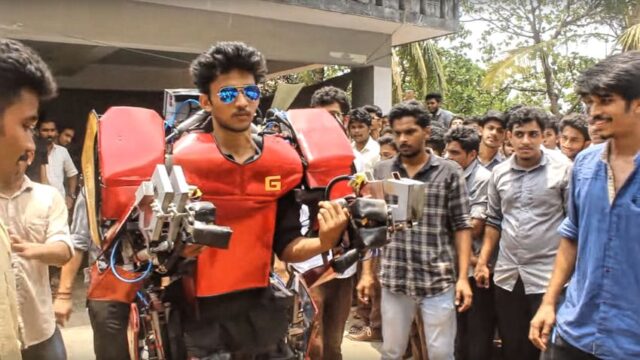 Vimal Govind Manikandan, an Engineering student from Kerala, has built an Iron Man suit of his own. The uber-geek student from Malappuram has designed a suit which is capable of lifting 150 kilograms. The ‘no ordinary’ costume is functional and will surely give one a feeling of being an Ironman.

Every superhero in the world has always wished to have their ironman suit. But apparently for many this remains a dream. But Manikandan instead of pinning and dreaming of owning one in the future just went ahead and built one for himself. As the men of the hour says ‘even though the suit cannot fly and has some difficulty in walking but that does not diminish the positive qualities’.

According to the maker, the wearable robot can come to use in the future for defense, weight lifting, and material handling. Individual soldiers can use the suit to lift massive objects. The only negative point is due to exoskeleton; it becomes quite difficult to run and walk in this robot suit.

The best part of the suit is that it cost Manikandan and his team roughly Rs 50,000 to make.

He got his inspiration from Hollywood movies, especially the suits actors wore in the Avengers movie. In fact, this is not even Manikandan first superhero suit; the team built their first prototype in 2015. The first robot was much larger and was mechanically-powered.

The young engineer paper was also internationally recognized. American Society of Research (ASR) has organized a conference Mechanics and Manufacturing (ICMM 2016) in Singapore where Vimal presented his robot. The young engineer paper got selected as one of the best from the 13 countries that submitted their paper. His study will also get published in the International Journal of Mechanical and Robotics Research.

Currently, the team is working on improving the prototype so that they can fix the walking ability of the robot.