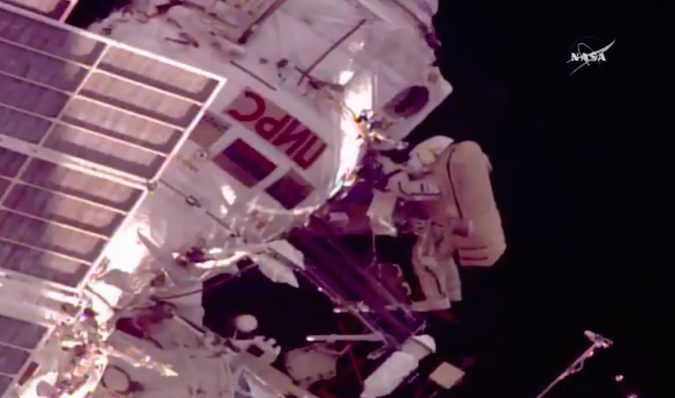 Adding a new feather to the existing cap of spacewalkers, two astronauts from Russia, have accomplished a seven-hour 34-minutes long spacewalk on Thursday. A duo of Russian cosmonauts including Fyodor Yurchikhin and Sergei Ryazansky successfully came back to the International Space Station (ISS) after conducting a long spacewalk outside the orbiting outpost on 17th August, Thursday and ISS took to the tweeter to express this news. Alongside ISS also has uploaded a small video clip of sun illuminating spacewalkers during the outside venture on its Tweeter account.

As told by the Mission Control Centre to TASS, during the spacewalk, the duo of cosmonauts lobbed five tiny science and tech satellites overboard and used up the rest of the expedition examining the exterior experiments. In addition to these tasks, the spacewalkers also conducted the regular but time-consuming examination and maintenance of the ISS equipment during the venture. Initially, the spacewalk was estimated to go on for 6 hours and 5 minutes. But later, bringing a revision to the original schedule, MCC extended the spacewalk as the cosmonauts failed to complete the assigned tasks within time.

As per the revised plan, the spacewalk instead of 6 hours and 5 minutes lasted for seven hours and thirty-four minutes. The general maintenance and inspection work took longer than expected, owing to which the Russian flight controllers prolonged the spacewalk beyond the earlier scheduled six-hour benchmark. Finally, after 7 hours and 34 minutes, the Expedition 52 commander Fyodor Yurchikhin and flight engineer Sergey Ryazanskiy shut down the Pirs airlock hatch at 6:10 p.m. EDT (GMT-4) and officially winded the seven-hour 34-minute-long spacewalk off.

As said by the mission managers, the duo of spacewalkers completed all of the assigned tasks within time, apart from one – the installation of one guardrail. The mission took extra time and forced the Expedition 52 crews to take the spacewalk ahead of the scheduled time. Thursday’s spacewalk was the first venture of the Russian cosmonauts outside space station since February 2016.

As officially confirmed, the next spacewalk is scheduled to take place in February 2018 and primary objective of the approaching spacewalk will be to install tools and machinery for retransmitting information to the Earth via the ‘Luch Satellite Data Relay Network,’ which is stationed on the outer surface of the International Space Station.