When Dorsey’s Twitter account was reactivated, the dashboard showed that he had less than 200 followers. However, the company managed to bring back all 3.8 million followers immediately. As of writing this, we can see a spike in his follower count with 3.92m users. Nearly 20.6K tweets posted by @jack has been restored. 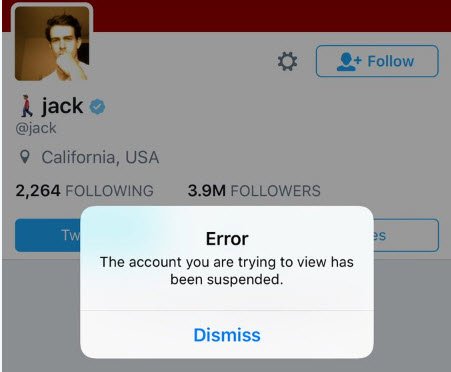 Commenting on the development, Dorsey disclosed that his account was suspended due to an internal mistake. Interestingly, the suspension was carried out when the company was looking to quickly suspend accounts that violate the rules.

The recent suspension of Dorsey’s Twitter account took place when the company was involved in scanning the database to quickly suspend accounts that violate the rules laid down by the company. Meanwhile, Twitter has categorically stated that the law enforcement officials are prohibited from using data gathered from Twitter for surveillance purposes.

During the past two months, Twitter has been suspending accounts, which violate the rules such as abuse. This was done during the recent US presidential elections, where users were found posting abusive comments against the candidates.

Currently, the company has been suspending accounts of users, who are aligned with terrorism. During the last one year, Twitter has suspended nearly 400,000 accounts based on these reasons.