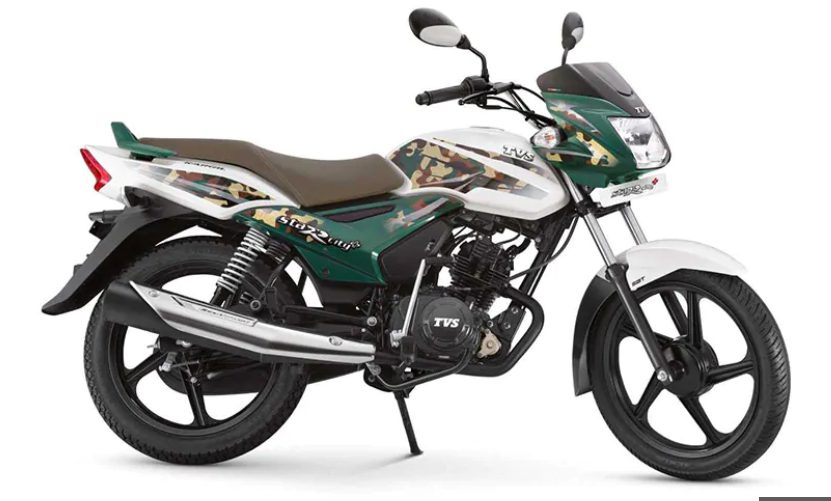 The popular Indian motorcycle manufacturer TVS has now launched the all-new TVS Star City+ Kargil Edition in the country. As the name suggests, this commuter bike is launched as a tribute to the spirit and attitude of the Indian soldier. That being said, the Kargil edition TV Star City+ is priced at Rs 54,399, as of ex-showroom, Delhi.

Starting with the design, the bike gets a dual-tone paint scheme. The same comprises of white and green colours, adorned by camouflage graphics at the fuel tank, front mudguard and other places. The Kargil Emblem, given at the rear is touted to denote the unconquerable spirit of every Indian by the company.

Certainly, the TVS Star City+ Kargil Edition is fired by the peaks, avenging terrain of the Kargil war along with the steely determination and discipline of the Indian soldiers who protect us day and night.

To be noted, the TVS Star City+ Kargil Edition gets the same mechanics as the Star City+. It has a 110-cc single cylinder engine that produces a maximum of 8Bhp and 8.7 Nm of peak torque; the bike propounds a 4-speed transmission. Furthermore, the commuter boasts of a single cradle frame along with telescopic front forks up front and twin rear shock absorbers.

The bike is equipped with 130mm front and 110mm rear drum brakes with TVS’ Sync braking technology. Sync braking technology is apparently the Combined Braking System made mandatory on all the motorcycles under 125 cc from April 2019. This tech ensures that both the front and rear brakes are used when a single brake lever is pressed. Hence, the evenly distributed braking pressure reduces the chances of skidding. Nonetheless, CBS is not as capable as ABS and consequently doubtful in emergency braking situations.

The government has also mandated the presence of ABS of all motorcycles above 125cc by April. Given that the aforementioned doesn’t reside in a 125cc+ category, the company has decided to skimp on ABS with this model.