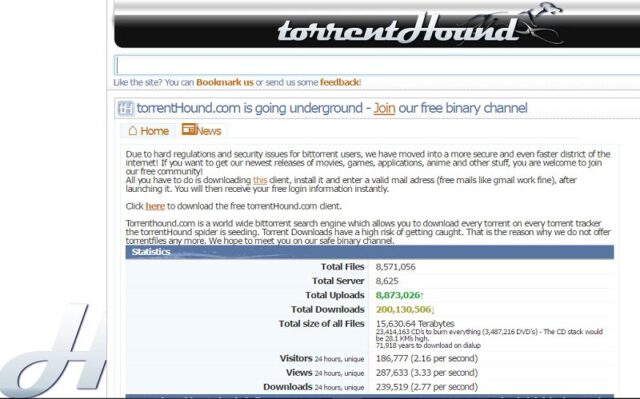 It seems the hay days of P2P file-sharing could soon be over, as TorrentHound becomes the latest torrent website to call it quits after KickAss Torrents and Torrentz.eu.

A major player in the world of torrents, TorrentHound becomes third file sharing website to shut down this year. Founded back in 2007, it has reportedly decided to pull the plug willingly.

Due to hard regulations and security issues for BitTorrent users, we have moved into a more secure and even faster district of the internet! If you want to get our newest releases of movies, games, applications, anime and other stuff, you are welcome to join our free community!

The website has been around for almost a decade with millions of visitors per month. Besides, it was also among the ten most visited torrent sites in terms of monthly visitors. That said, it still could not gain as much popularity as the likes the Pirate Bay, KickAss Torrents and Torrentz.eu.

In a statement provided to TorrentFreak, TorrentHound founder said, “It’s a combination of less traffic, less revenue and our bills piling up. Then add on constantly getting bugged by anti-piracy agents, just wasn’t worth the headache anymore.”

Hence, as TorrentFreak points out, it is highly unlikely that TorrentHound succumbed to the pressure from legal authorities. The website’s homepage is still providing links to alternative torrent sites.

While earlier this year, KickAssTorrents went offline after the arrest of its alleged founder Artem Vaulin. Following the demise of KickAssTorrentz, even the popular torrent search engine Torrentz.eu went dead. Besides, access to the five most popular KAT proxies along with the main website were also restricted.

KickAssTorrents isn’t the first to be targeted government authorities for illegal sharing of multimedia content. As online piracy giant, Pirate Bay has gone through its fair share of arrests and domain seizures in the past few years.

In fact, many torrent sites such as Newnova, IsoHunt, TorrentSpy have had their fair share encounters with legal authorities in the past decade, forcing them to shut down. Are these signs that the glory days torrent sharing may well be over? Do share your thoughts in the comments section below.