Tiger spotted in the outskirts of Bengaluru city 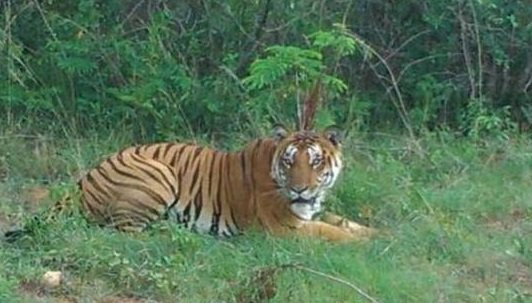 July 7, 2015: Forest officials in Bengaluru have reported spotting a tiger, around the Bannerghatta National Park close to the city.

In the last few weeks, many clues have pointed to the presence of the large cat. Forest officials and safari vehicle staff have found pug marks among other clues.

It was finally confirmed that the tiger was indeed present within ten kms of the city after forest van driver Satish clicked pictures of the large mammal.

Officials are guessing that the tiger may have come close to city from the Tiger Reserve located near BR Hills, which is 70 km away or from Cauvery Wildlife sanctuary.

It is yet another suggestion that tigers are indeed increasing in the jungles of Southern India. For now, the forest officials have a reason to smile.

For the people in Bangalore, there is nothing to worry as the large cat will have sufficient prey to hunt in the Bannerghatta area. Although, the forest officials may have to consider the fact that the city is expanding fast.

In a report of Economic Times, tiger scientist Ullas Karanth was quoted saying that tigers may not attack, but it is worthy to be ready with all preparation for protecting livestock. He also said that people should be informed as there is always a chance of conflict.

The tiger was spotted on Saturday afternoon, by some of the tourists who were on a safari in Bannerghatta Biological Park. However, it couldn’t be ascertained if it were one of the seven captive ones.