We have seen a tremendous change in the Smartphone industry and now that has trickled down to other consumer electronics as well. Case in question is Smart TV’s, gone are the days when they out of an average consumers budget. Things have changed now and we’re seeing more and more TV players getting into the budget segment which got fueled by Xiaomi last year.

One such product is the Thomson UD9 4K TV. Now the brand is new in the Indian market and has managed to make a splash with their products. We got the 40-inch model, which is one of the first to bring a 4K HDR panel at this size. So, let’s dive in the review to find out how good the TV is. 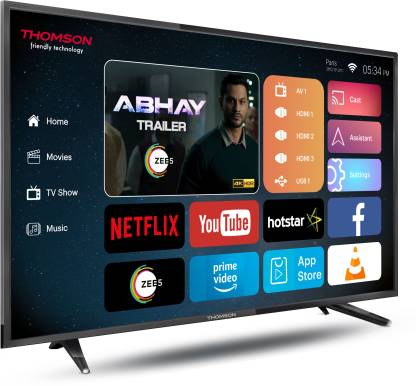 There is nothing new when it comes to design, the model resembles other budget TV’s and to Thomson’s other models as well. You get fairly slim bezels all around which are glossy and might hinder the viewing experience if you have a light source opposite to the TV.

The whole construction is done with plastic which is to be expected from a product at this price point. You get the wall mount and the two legs which are also made out of plastic as well. The Thomson logo is placed in the center of the bottom bezel with the power button underneath. Thomson has placed all the HDMI and USB inputs on the side while other ports have been moved to the back. You get a standard remote control with the TV which has all the basic controls on it, nothing fancy here unlike the Android Tv remotes that have dedicated app buttons on them.

Overall, we find the build fairly sturdy when comparing it to all the budget TV in this price segment. 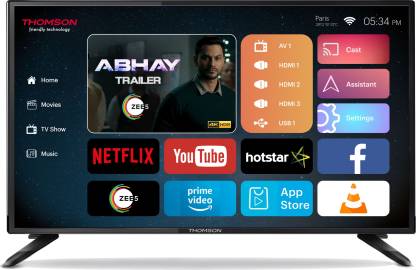 In terms of connectivity, you get all the major ports but do miss out on some. There are three HDMI ports with one of them being ARC compatible. Along with this you also get two USB 2.0 ports, RCA input, and TV antenna input.

You also get an RJ45 connector and WiFi but sadly Bluetooth is missing. Also missing are the optical and S/PDIF ports. There is support for 3.5mm line out which will come in a handy while hooking up older generation music systems to the TV.

The placement of these inputs is also carefully thought out with all the HDMI and USB inputs placed on the side and the rest of them on the bottom, though we could have also like the 3.5mm jack on the side just for easy access.

Coming to Software, this is one of the areas where the TV lacks and frankly pulls down the overall experience. Instead of a full-fledged Android TV experience which is backed out by Google, you get a forked AOSP to build with Thomson’s UI on top of it. Under the hood you get android but the apps running on it are for mobile. So, on the face value, you get support for all the popular streaming apps but they all detect this TV as a mobile device.

You get a simple UI, with apps laid out neatly. Thomson has added an App Store on this which allows you add more apps to the TV. Other elements added include an Assistant which tracks all the vital elements, easy input switcher, weather app and a Cast app to cast content from your phone onto the TV. 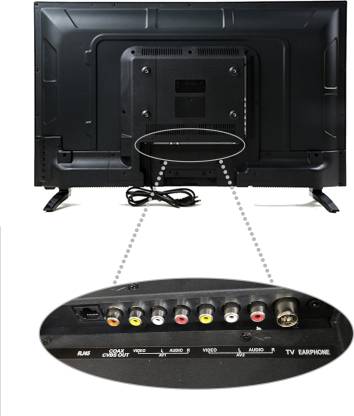 When it comes to performance, the center of attraction of this TV is its 4K panel. Now Thomson has gone with a mixed bag of DLED & VA panels and it’s hard to tell which one you will get. The TV comes with 1GB RAM and 8GB onboard storage out of which almost 50% is used by the AOSP ROM and installed apps.

All the processing is being handled by the Quad-core Amlogic chip while the graphics are looked after by a Mali GPU. As previously mentioned, the TV is powered by a custom Android build which is based on Android 7 Nougat and the apps used here are mobile apps ported onto the TV. When it comes to content upscaling the TV works fine but we will highly suggest you switch to an HD DTH connection for better viewing experience.

Other than this, the TV is best used as a screen with other inputs hooked to it. we ran a bunch of tests with various inputs ranging from PS4, FireTV Stick and video sources from external drives and the picture quality actually came out to be very decent. The panel has a peak brightness of 550 nits which is a tad above the bare minimum limit to enjoy real HDR. 4K content when played via the FireTV stick and the PS4 worked perfectly, we thoroughly enjoyed our Netflix bingeing sessions but the TV stuttered to play 4K content external drives.

The panel comes with a standard 60Hz refresh rate making it not the best choice for gaming but that is to be expected. That being said, the panel has deeper blacks which are always a plus and gets fairly bright.

When it comes to audio, the TV comes with two 10W downward-firing speakers, outputting a total of 20W. Though the speakers get sufficiently loud to fill up a big room very easily distortion seeps in on high volume. When compared to other TVs in their price segment, the speaker output is almost the same across models. Thomson has not opted for either Dolby or DTS HD support which is quite common in TVs at this price point, but ‘hey you at least get a decent 4K panel’.

People looking for a richer sound experience should invest in Home Theatre unit or a budget soundbar. 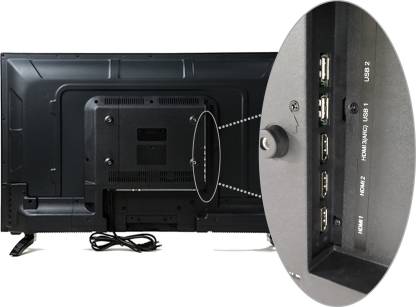 The Thomson UD9 40-inch 4K Smart LED TV comes in at a time and price point where not a lot of brands are offering a 4K TV in this smaller size. Being the smallest 4K TV available in the market did catch some eyeballs.

With some tweaks you could get a decent viewing experience out of this TV, however, the performance was largely a letdown. The smart interface is buggy and slow, the sound is average and no support for HD streaming on OTT platforms is something we couldn’t ignore. When used purely as a screen with a streaming device, you could get a decent experience, but adding those extra gizmos will drive the cost up.

Coming in at INR 19,999, the Thomson UD9 is among the most affordable 4K TVs you can buy right now. If you’re hellbent on getting a 4K TV in this size, then it is the best option if you already own a FireTV stick or a similar product, if not then we would suggest you to look at some other options.