PC-Tablet
Ads
Home News The Nokia 110 4G can be the new king of the feature... 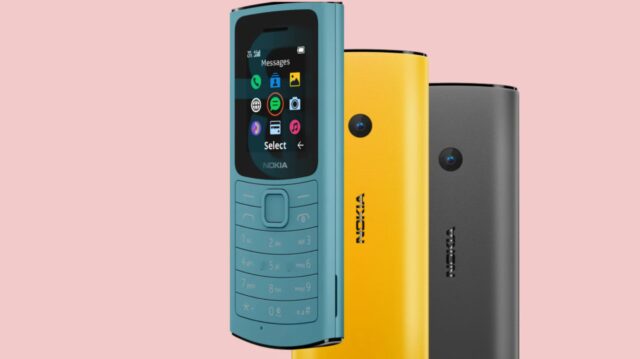 There is a new Nokia phone on the block. It is the Nokia 110 4G feature phone which does entice us with its cute yet potent looks. The first thing that catches the attention of the Nokia 110 is its compact form factor, which together with the rounded edges, makes it comfortable to hold and operate.

The Nokia 110 4G comes powered by the Unisoc T107 SoC and is coupled to 128 MB RAM and 48 MB of storage. Those figures might sound too insignificant but serves the purpose, nonetheless. Plus, there is the provision to add another 32 GB of storage via micro-SD cards.

The highlight on the front is the 1.8-inch QVGA color display having a resolution of 120 x 160 pixels. The keypad layout should be familiar for old-time Nokia fans and does not break any new grounds here. Flip over and you will find a 0.8-megapixel QVGA camera, which along with the vertically inscribed Nokia branding is the only notable aspect on the rear. Then there is a built-in torch too, which is another blast-from-the-past feature.

Other notable features of the phone include 4G LTE support along with HD voice calling ability and dual SIM slots. The phone runs on a Series 30+ operating system. Keeping the lights on is a 1,020 mAh battery, which the company said will be able to sustain 13 days of standby time and 16 hours of music playback. A micro-USB port allows for charging the phone.

Another nice feature of the Nokia 110 is its support for both wired and wireless FM Radio. What that means is the phone can be used to listen to FM Radio even without connecting the headphones. There is an integrated video player, an MP3 player, and a 3-in-1 speaker system as well.

To further add to the entertainment quotient, the phone also comes pre-loaded with classic games including the all-time favorite Snake which once was the rage of the town. Then there also are apps such as English with Oxford that should help you brush up your English skills a bit.

Another cool feature of the new Nokia 110 is a newly designed UI where you have the option to zoom in on the menus for ease of navigation. Plus, there is a new readout feature as well that will narrate the menu options and such, which further aids in navigation.

The new Nokia 110 4G is priced at Rs. 2,799 and comes in shades of Yellow, Aqua, and Black. The phone is available to buy right now from Amazon.in as well as Nokia.com.