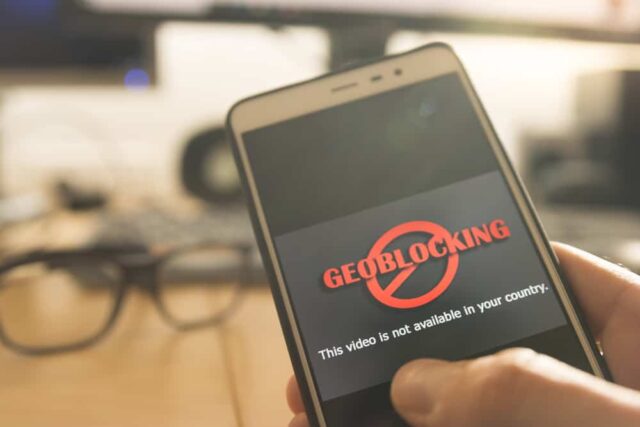 Geo-blocking can be a source of much frustration for regular internet users, whether they’re trying to read a particular news site or watch their favourite TV shows from abroad. In this article, we will look at why geo-blocking exists, how it works, and the ways in which you can avoid it.

Why does geo-blocking exist?

Licensing deals for television shows, films, and music are traditionally handled on a country-by-country basis, with representatives of production studios and recording companies negotiating deals in their own countries.

This system made sense back when television content was only accessible through analogue channels and music through radio, as countries generally have their own specific channels with their own audiences and budgets.

While a lot of media consumption has switched away from traditional outlets – with online streaming overtaking pay TV in the UK in 2018 – licensing deals for content still adhere to the old system. This created a problem: as the internet is global, users can access websites wherever they are in the world, and rights-holders were not happy that this could let users get around regional contracts.

Geo-blocking, which allows the viewing of certain content to be restricted to specific countries, was invented as a way to uphold regional licensing deals even in the global marketplace of the internet. While it makes regional rights-holders happy, geo-blocking is causing a lot of frustration to customers who want to watch new shows before the spoilers come out or who want to access specific “must-have” content that isn’t visible in their location.

Essentially any online streaming service and video platform use some form of geo-blocking, with Netflix, Amazon Prime, and YouTube generally drawing the most ire from users. Geo-blocking is not limited to streaming services though, as online stores use it to price-discriminate against regions where customers are able to spend more. Flights, for example, will often be more expensive when booked from IP addresses in the UK than IPs in India, and the same is true for game downloads.

Some services, like the streaming sites Hulu and HBO GO, are only available in select countries in the first place. This is also often the case with public broadcasters, for example, the BBC’s iPlayer content is only accessible in the UK because it is paid for by UK TV licenses – which can be annoying for UK residents travelling abroad.

Since the introduction of GDPR, many web users have also been left out of news updates because of publishers’ uncertainty around the new rules and regulations on monitoring site visitors and sharing information with people within the EU. Rather than simply giving people the option to opt out of being tracked via cookies, sites in the USA and Australia now frequently tell European audiences that they can’t read their news anymore, effectively geo-restricting it despite there being no legal obligation to do so.

How does geo-blocking work?

Geo-blocking generally works through the detection and location of IP addresses. IP (Internet Protocol) addresses are a string of numbers unique to every device that connects to the internet, which allows websites to where their users are located. They can also be used to track activity relating to a certain IP, for example, browsing history and device detail

When you go to any website, the site is usually able to see the IP address you are connecting from. This can be used to pinpoint your location right down to a street level in many cases. Sites like Netflix and Amazon Prime use your IP address details to restrict the content that they show you to whatever is available in your regional catalogue.

Who is most affected by geo-blocking?

It’s common knowledge that Japan and the US have by far the largest Netflix catalogues, as these are the streaming service’s largest markets. US viewers also have access to a number of services not available elsewhere in the world. But conversely, when it comes to YouTube it’s US users who suffer the most from geo-blocking, as many content creators put content on YouTube for foreign audiences.

What may come as a surprise to many, however, is that many other developed countries lag far behind in streaming catalogues. With the notable exceptions of the UK and Ireland, most European countries have smaller libraries than places like Nepal and Pakistan.

The reason for this difference is likely that in Europe many shows already have licensing deals and production studios have preferred partners, as there has been a large demand for shows, film and music for many years. In regions like Bolivia and Zambia, on the other hand – places which both offer a wider range of entertainment content than France, Germany and Spain – there were less previous licensing deals before streaming services came around, making it easier for streaming sites to license content.

Can I get around geo-blocking?

Luckily for users from regions with limited streaming catalogues, there are ways to get around geo-blocking. Since geo-blocking centres around the detection of your location via your IP address, hiding your real IP is the key to accessing your favourite streaming content wherever you are in the world, and to saving money on online purchases.

Virtual private networks, or VPNs, are a tool designed to offer anonymity and security to users browsing the internet. When using one, your IP address is hidden and replaced with that of one of the VPN’s servers. And, because these services have multiple servers in a wide selection of countries, you can connect to the internet via just about any alternate country you choose. Connect through a VPN server in the US, for example, and you may be able to watch US-targeted streaming services that are blocked elsewhere in the world under the guise of an American IP address.

This is particularly useful if you want to watch the services you pay for back at home while you’re travelling elsewhere, but do be aware that some streaming services seek out VPN IP addresses and try to block their access.

In the future, geo-blocking will hopefully become a thing of the past as production studios, record companies and other rights-holders accept that the internet is a global marketplace where regional restrictions only cause frustration to customers. In the meanwhile, if you don’t want to wait for antiquated industries to catch up with the twenty-first century, try concealing your location where possible to experience a wider range of online streaming content and keep up with region-locked news, wherever you are.