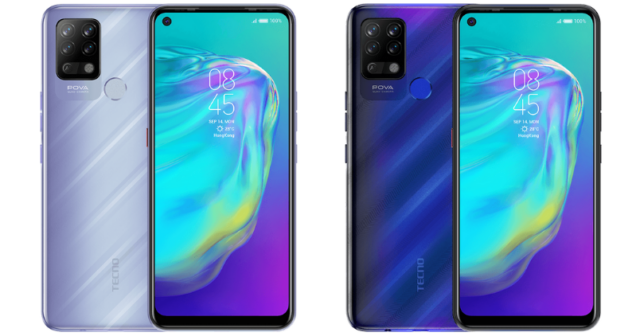 Techno Pova is the newest entrant in the budget smartphone segment in India. And with impressive specs such as an Helio G80 processor, quad rear cameras, and a large display, the new Pova sure has what it takes to take the battle to the competitors. Prime among those is, of course, the killer pricing, which starts at Rs. 9,999 for the base 4 GB + 64 GB model and Rs. 11,999 for the 6 GB + 128 GB version.

The latest in the Pova series of phones come with a massive 6.8-inch HD+ Dot-in display that is lit up by 1640 x 720 pixels while having 480 nits of brightness. The display looks nice thanks to the minimum bezels all around, even though the chin at the bottom is a bit perceptible. The display otherwise makes for a 90.4 percent screen-to-body ratio.

Under the hood, the phone comes with a MediaTek Helio P80 12 nm chipset, which also powers several of Pova’s competitors, such as the Narzo 10 and the Poco M2. The Pova meanwhile also features the ARM Mali G52 MC2 for efficient graphics processing.

The Pova is available in two variants, the base model with 4 GB of LPDDR4x RAM and 64 GB of storage, while the top model comes with 6 gigs of LPDDR4x memory and 128 GB of native storage. In both cases, you have the option to add another 256 GB via microSD cards.

The camera specs comprise of a 16 MP f/1.85 primary cam along with a 2 MP macro sensor and a 2 MP depth sensor. Plus, there is an AI lens as well at the rear, as is a quad-LED flash. The front gets an 8 MP f/2.0 selfie cam complemented by a dual-LED flash.

The Techno Pova will be up for sale from Flipkart starting December 11, 2020. Colour options with the phone include shades of Speed Purple, Dazzle Black, and Magic Blue.