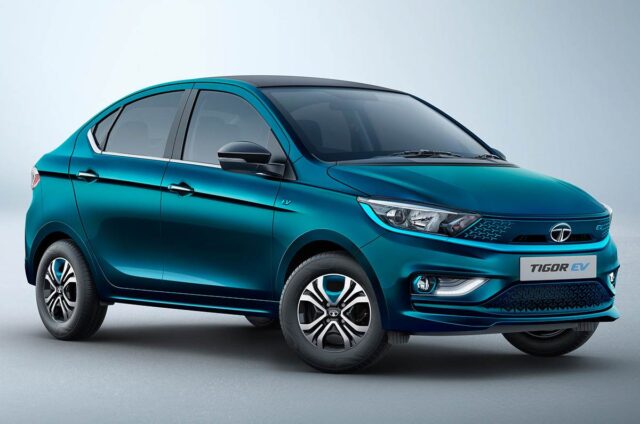 The Tata Tigor EV is set to be the second electric vehicle offering from the homegrown auto major that is aimed at the personal commuting segment in India. Also, while the Tigor is set to debut in India on August 31, details about its specs have come to the fore, which includes an over 300 km of driving range on a single charge. Some sources are even claiming a range of 350 km on a single charge, which if true, is going to be quite outrageous by any standards for a car likely to be priced in the vicinity of Rs. 10 – 15 lacs.

Also, similar to the Nexon EV, it is the Ziptron electric module that would be powering the Tigor EV. However, it is a smaller 26 kWh battery that would be powering the Tigor EV compared to the 30.2 kWh battery for the Nexon EV. The Nexon, meanwhile has a company claimed range of 312 km. Interestingly, Tata Motors is also claiming a similar range for the Tigor EV as well even with a smaller-sized battery pack. Maybe that has to do with a lower kerb weight for the Tigor EV compared to the Nexon EV. The lithium-ion battery pack complies with the IP67 rating for water and dust resistance.

In terms of power, the Tigor EV is capable of a peak power output of 55 kW (73.75 hp) and a peak torque rating of 170 NM. Those may not seem too impressive on paper but should be adequate on the tarmac. The zero to 60 kmph comes up in a mere 5.7 seconds. It is set to be available in three trim levels of XZ+DT, XZ+, and XM. Onboard, there are going to be two driving modes – Drive and Sports. Charging time is 8 hours when plugged into the 12A home sockets while the company-supplied charger will be able to charge up to 80 percent in one hour.

The company is also following a similar style cue with the Tigor EV as that of the Nexon EV. That includes blue-colored inserts to signify its EV status. There are going to be the blue inserts on the brake calipers along with the signature blue-colored tri-arrow-shaped inserts present on the grille as well.

Otherwise, there isn’t anything that can differentiate the Tigor EV from its fossil-fuel counterparts. Interestingly, it is a similar strategy that the Tatas have adopted with the Nexon EV as well since the electric variants of both models are exactly the same as their petrol or diesel counterparts, which is a measure to keep costs low. In that vein, the Tigor EV hasn’t exactly been designed from the ground up as an electric vehicle but has been adopted for that role.

While the car is expected to be formally launched on August 31, those interested can pre-book the car by paying Rs. 21,000. The car’s pricing along with all other details is expected to be announced during launch time.

Worth mentioning, the Tatas have also been offering an electric variant of the Tigor for some time now. However, it wasn’t available to the general public but was supplied to the EESL as part of an agreement with the government. The upgraded model of the same car has come to be rechristened as the Tata Xpress-T and is now available to fleet operators as well.