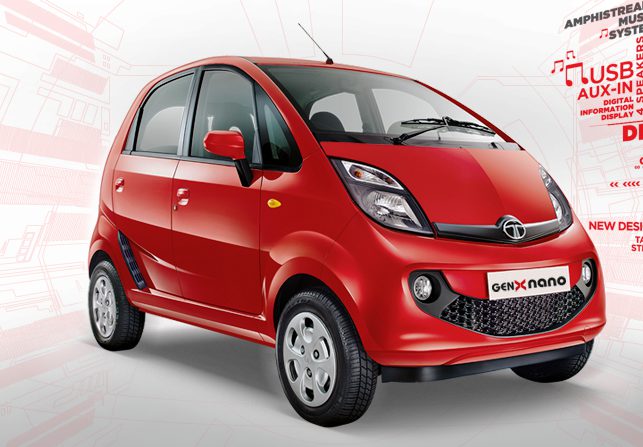 Tata Motors has launched the new Genx Nano today in India. Genx Nano will be available in 21 different variants with price ranges from Rs 1.99 lakhs to Rs 2.89 lakhs.

The new car would be available in over 450 Tata Motors sales outlets across the country.

Genx Nano has starting base price of Rs 1.99 lakhs (ex-showroom in New Delhi) for the XE version.

The prices go up to Rs 2.49 lakh for the XT version that is available for manual transmission. 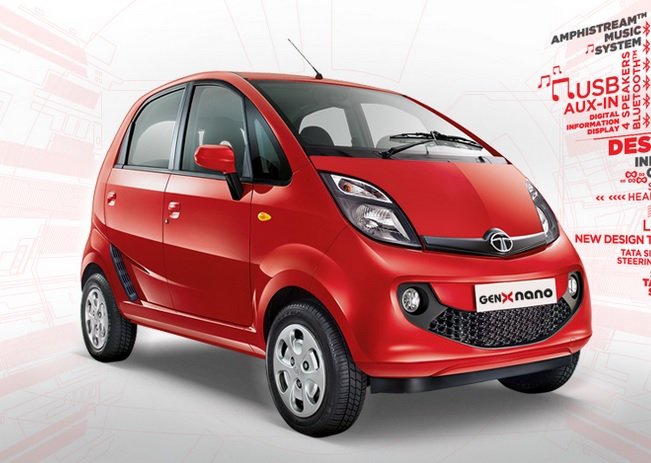 The automated manual transmission (AMT) version XMA will be available in August 2015 at Rs 2.69 lakh whereas the XTA variant is available now at Rs 2.89 lakhs.

The New Genx Nano is being position as a city car. Tata Motors is promoting the new AMT feature as ‘Genx Nano Easy Shift’.

Tata Motors has also backed the launch of Genx Nano with an aggressive marketing campaign.

They have launched exclusive prizes and a new website focused at Genx Nano.

Tata Motors has made significant changes in the new Genx Nano in designing front.

The car has got all new front smiling honeycomb grill along with fog lamps. The new car sports a completely redesigned electric-assisted power steering.

To appeal to the youth, Genx Nano has got full surround sound effect speakers and Bluetooth connectivity.

The new car would be powered by the 624 cc; two-cylinder rear mounted petrol engine. This engine produces a power of 38.19 bhp and a maximum torque of 51 Nm.

The new car has a 24-litre fuel tank and is expected to return a mileage of 21.9 kmpl. Tata Motors is also offering an additional warranty of 4 years or up to 60,000 km for the Genx Nano.

Tata Motors is giving benefits of priority pre-booking of the new variant of Nano to their existing customers. Customers will also get benefits from exchange offer schemes to upgrade from existing Nano.

Tata Motors is also offering exchange bonuses of up to Rs 20,000. Tata Motors has also launched a referral scheme where each successful referral can earn a cash voucher of Rs 5,000.

Dubbed by many as people’s car the first variant of Nano was launched by Mr. Ratan Tata in 2009. The base version of the car was priced at Rs 100,000, and the car was dubbed as the cheapest car.

With Genx Nano, Tata Motors has revived the franchise. By adding the AMT feature, the new Genx Nano will compete with Maruti Suzuki Alto and Hyundai Eon, which has a healthy sale of 15,000 units every month.