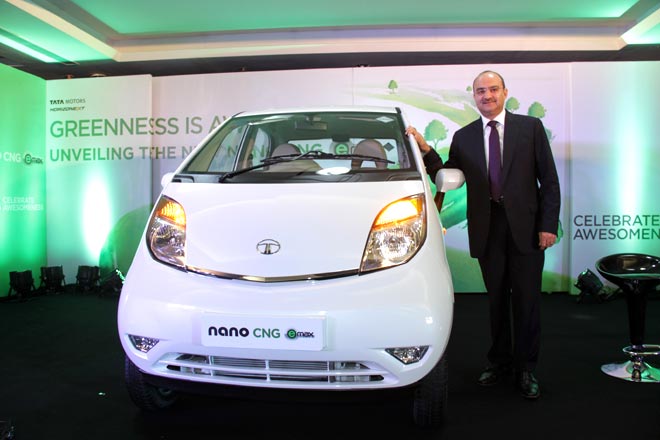 Tata Motors was committed to launch the CNG variant of its popular car Nano. The company unveiled its plans first at the Horizionext event, held in Pune in June 2013. Today, we learn that TATA Motors, an arm of the TATA company has officially announced the launch of the CNG compatible model of the Nano (Tata Nano CNG emax)  in 2 variants with prices ranging from Rs2.40 lakh to Rs 2.65 lakh (ex showroom, Delhi).

At Tata Motors the core philosophy behind the launch of every new vehicle is anticipating what our customers need and blending it with the best-in-class technology and design engineering. This helps us arrive at an end product that suits the inherent automotive needs of our customers in a holistic way. From its inception, the Nano has been path-breaking invention and the CNG version only adds to that and also underlines our commitment to be a sustainable automotive player.

On safety side, the car is equipped with Leak detection sensors and interlock sensors that automatically shut off the engine while refueling at the CNG station.

Despite improvements, there’s no fight for space. Cylinders are fitted under the front seats that do not intrude into passenger or luggage space. The car has a fuel efficiency of 36 Km/kg.

At times, where fuel prices are rising steadily, I see Tata Nano Emax making a case for itself as a personal car that is light on budget.  Tata Nano emax CNG will  be available across CNG markets like Delhi, Gujarat, parts of Maharashtra and Lucknow.