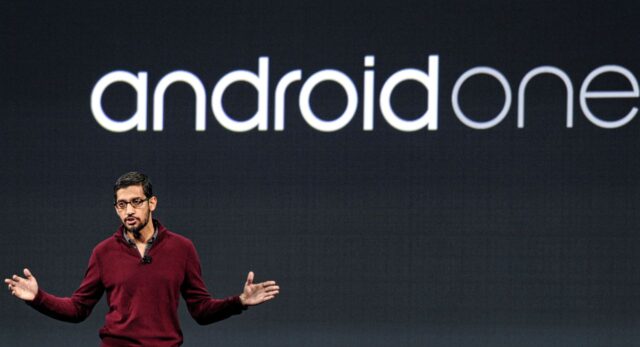 Sundar Pichai, Google CEO is slated to visit India around the middle of December. According to reports coming in from Insiders, he is expected to announce the launch of Android One v2.

The required invitations have been mailed to all media representatives and tech bloggers for the grand Google India event to be held on December 16. Moreover, Google is also expected to include the manufacture of Android One v2 powered smartphones under “Make in India” initiative.

Pichai is also expected to meet President of India, Sh. Pranab Mukherjee and Prime Minister Sh. Narendra Modi to discuss about Google’s ambitious projects such as enabling Wi-Fi in the main cities and railway stations across India.

Prime Minister Narendra Modi had, in fact, met him during his recent visit to California, USA. There are reports that he is also scheduled to meet Arvind Kejriwal, Delhi Chief Minister.

The media invite doesn’t mention that Android One v2 will be launched at the event. There are reports that Google is all set to reveal its future plans including a bigger sized Nexus tablet featuring Android M OS.

“At Google, we believe that technology can change people’s lives for the better. Indians are coming online at an astonishing rate with affordable smartphones. These new users have a completely fresh view on what the Internet has to offer. Please block your date for an event with Google as we outline our vision for these users,” the invite said.

Android One v2 will be successful only if Google manages to tie up with manufacturers to manufacture budget smartphones. A new 5-inch smartphone with Android One v2 priced at around INR 4,999 will provide a much-needed boost to the highly competitive market.

Moreover, Google should try to sell Android One v2 offline as well. Their approach to exclusive online sales doesn’t work as expected in 2014 when they released Android One.

Google launched its highly hyped Android One in 2014 with e-commerce sites such as Amazon, Flipkart and Snapdeal exclusively pushing the sales of smartphones at that time.

Chennai-born Pichai was in charge of Android at that time. However, his upcoming visit assumes great significance especially after taking over as Google CEO.

Pichai’s itinerary also includes a power-packed interaction with students from all over India at the Delhi University. He is also expected to visit Google office in Hyderabad and possible dinner event with Mr. Chandrababu Naidu, who is aggressively promoting ‘Make in India’ project with Xiaomi shipping its Redmi Prime 2 from its factory in Telangana.