A student working with the Nanjing Institute Of Geology and Paleontology under the aegis of Chinese Academy of Sciences has stumbled upon a 120 million-year-old fossil purported to be an ancestor of the modern day grasshopper. The fossil was discovered in Yumen in the Gansu province and consists of a well preserved 3-centimeter section of the ancient insects wings.

Wang He, a student at the Nanjing Institute of Geology and Paleontology, said that there are only fossils of insect wings because their bodies are readily decomposed or are devoured by other creatures.

Scientists, therefore, judge the insect by the wing, strata where the fossil was recovered and nearby associated fossils. Judging by the above parameters this insect wing in all probability was the ancestor of the modern Grasshopper.

Analyzing the structure of the wig, Wang said that the ancient insect could purr just like our modern day grasshoppers. Wang added that the modern day insects had a weaker wings and reproductive organs as compared to their ancestors. 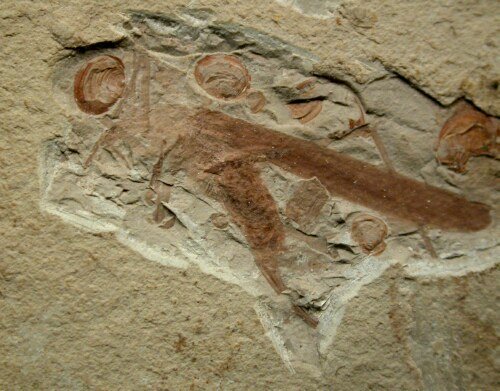 According to Zhang Haichun, a paleontology professor at the Institute, fossils of orthopteran family Prophalangopsidae are a rarity and not been found in Gansu province. They were found in other parts of China and other regions of the world. These insects live in a humid climate and present day Gansu is dry. It means the region had a humid climate and full of water systems.

The insect was termed to be of a period when the first flowering plants made their appearance on the planet. These insects ate flowers and plant leaves.

The fossil has since been preserved at the institute that has proper preservation facilities. Slabs bearing fossils found in Northwest China had a fair amount of salt, and these salts can absorb water and destroy the specimen. Therefore, they have to be preserved in proper condition.