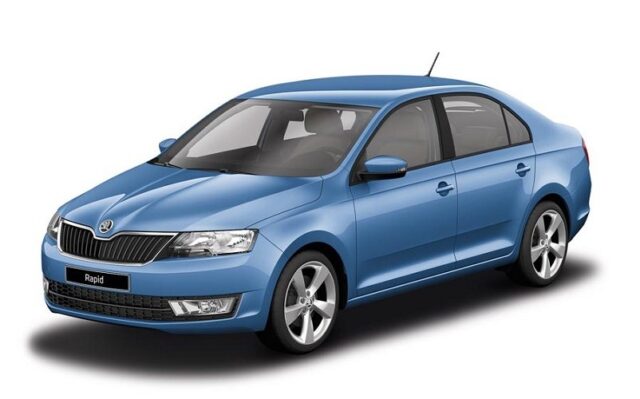 The new Skoda Rapid facelift is reportedly set for its India launch on November 3. The company’s authorised dealerships across the country have already started accepting bookings for an amount of Rs. 25,000.

The Skoda Rapid facelift is expected to get several design tweaks such as sleeker headlamps, a redesigned front bumper, along with a new radiator grille that is eerily reminiscent of the present-generation Skoda Octavia. The upcoming Skoda Rapid’s front profile is largely similar to the current-generation Fabia hatchback sold internationally. Besides, the cabin is also expected to get a slew of changes such as the use of premium materials along with a touchscreen infotainment system.

Under the hood, the car is expected to retain the same 1.6-litre TSI petrol engine which churns out 105 PS of power and 153 Nm of torque. The engine gets mated to either a 5-speed manual or a 6-speed automatic transmission. The diesel variant of the Skoda Rapid facelift will get the new 1.5-litre TDI engine, also found on the recently launched Volkswagen Ameo. The 1.5-lite TDI motor produces 110 PS of power and a maximum torque of  250Nm. The drivetrain of the diesel model will likely be available in a 5-speed manual or a 7-speed DSG gearbox.

Once launched, the Skoda Rapid facelift will rival the likes of Volkswagen Vento, Honda City, Hyundai Verna along with Maruti Suzuki Ciaz.

In other related news, the Skoda Kodiaq SUV is expected to hit Indian roads by September 2017. The India-bound Kodiaq SUV will likely get the 2.0-litre TDI diesel engine with a 7-speed automatic transmission. The company recently unveiled the SUV at an event in Berlin. The Skoda Kodiaq marks the first ever 7-seater model from the company. Its name is inspired by the Alaskan bear – Kodiaq, as it looks quite like a bear with its muscular design and off-roader-like look and feel.