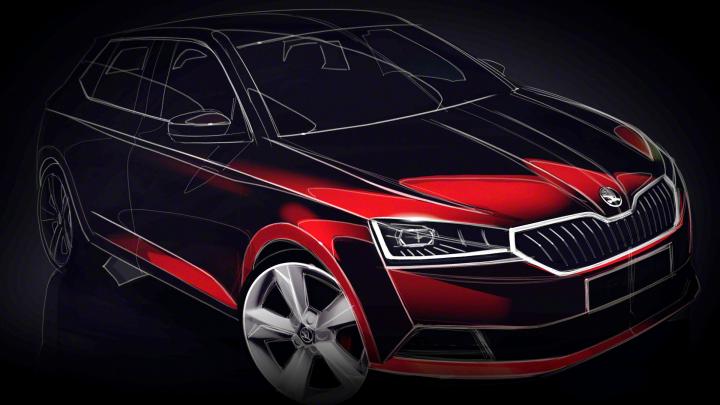 Skoda has given us a teaser of its next-gen Fabia hatchback, which is all set for an unveiling at the Geneva Motor Show in March. Going by the teaser, the facelifted Skoda Fabia is expected to get a noticebale design overhaul.

The skectch suggests that the upcoming Skoda Fabia will feture LED lights, along with LED daytime running lights for the first time. The 2018 Skoda Fabia is also due for some major design tweaks. For instance, the teaser reveals that the front grille will get a slighty more pronounecd chrome frame compared to earlier models of the hatchback, lending it a fresher, bolder look.

Other details remain thin at the moment but Skoda suggests the facelifted Fabia will feature fresh new design elements alongside state of the art technology. The company says that its upcoming hatch will come equipped with what Skoda describes as ‘simply clever features‘. The automaker notes that these are rather nifty features fitted in its car such as a garbage bins for every door or umbrellas fitted in door pockets, that passengers would find really useful.

The facelifted Skoda Fabia is also expected to fetaure revamped interiors, coupled with the latest infotainment system from Volkswagen. These may include suuport for Apple CarPlay, Android Auto, gesture controls, as well as MirrorLink technology.

The engine, however,is likely to remain unchanged with the same 1.1-litre petrol engine alongside a 1.4 TDI diesel. Though rumor has it that Skoda could bring a new 1.5-litre TSI petrol engine from the Volkswagen Group.

The 2018 Skoda Fabia debuts on the 6th of March this year at the Geneva Motor Show. Though so far, there is no specific timeline on when will the Skoda Fabia facelift will hit Indian shores. Skoda, however, has already confirmed its plans to reintroduce the Fabia in India given the fact that the premium hatchback segment in the country has matured. The Fabia, when first launched in back in in 2008, was seen as a premium hatchback that was slightly ahead of its time. However, the 2018 Skoda Fabia will have its fair share of rivals when it arrives in India. These include the likes of Hyundai i20, Maruti Suzuki Baleno, Volkswagen Polo, as well as the Honda Jazz.