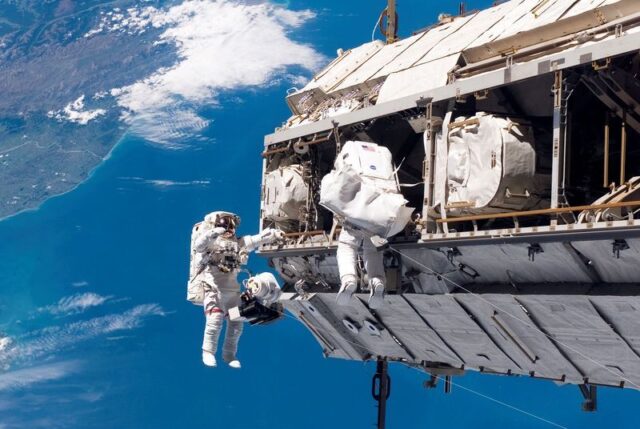 The International Space Station (ISS) mission managers are preparing for an unplanned spacewalk on or after Monday. The spacewalk will be done by Astronauts Scott Kelly and Tim Kopra, who had arrived on the station on Tuesday. The three-hour spacewalk will be the 191 in support of maintenance and repairs to the farthest manned outpost of mankind. Kelly will be conducting his third spacewalk in the current year while it will be the second for Kopra who arrived at the space station on Tuesday.

The unscheduled spacewalk will be conducted from the US Quest airlock on the ISS just before the start of the holidays. The emergency spacewalk was necessary because of a stalled mobile transporter rail vehicle – used to position the station’s robotic arm. The stall happened on Wednesday when the robotic arm had moved just 4-inches said the United States space agency in a statement.

According to Kenny Todd, the station’s Mission Integration and Operations Manager in Houston, the stall could have been caused by a stuck brake handle. The transporter had the last stuck in December 2005 when a cutting system had accidently cut the power and data cables.

The trash-filled Progress 60 (60P) undocked 7.35 a.m. UTC and re-entered the atmosphere a couple of hours later in a fiery end over the Pacific Ocean.

The Soyuz TMA-19M is docked to the Rassvet module. The section of the ISS where the Progress craft was docked will remain empty till a new delivery spaceship arrives and docks to it filled with science and supplies replenishing the Expedition 46 crew.

The stuck cargo transport rail car outside the International Space Station will have to be freed to allow for the arrival of a supply ship two days later.

NASA spokesperson Kelly Humphries said, the ISS Mission Management Team will try to conduct the Spacewalk on Monday or will take an extra day and conduct the spacewalk on Tuesday.