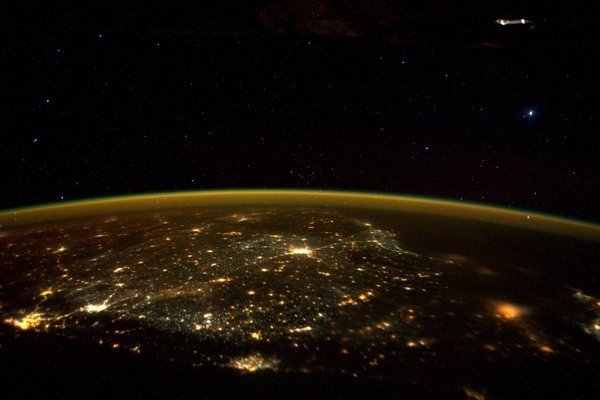 Scott Kelly, an American astronaut, has shared a stunning picture taken from his outpost aboard the ISS (International Space Station). This stunning picture of how Southern India looks comes after a picture of the international border between the India and Pakistan was shared by NASA earlier. The astronaut aboard the ISS took the picture while looking at the Indus river valley in Pakistan and clicked the border with a Nikon D4 digital camera using a 28-millimeter lens on September 23.

The Indo-Pak border is one of the places which has been lit up by hundreds of flood lights and can be viewed from space as a winding line outlining the boundaries of the two most belligerent nations in the world.

In 2011, NASA had also shared a picture that showed the border zone looking southeast from the Himalayas.

The present picture is a view from the South-West direction looking towards the Indian Peninsula jutting into the Indian Ocean. The lower border of the picture seems the Western Coastal region of the Southern India Peninsula.

Scott has been spending almost a year in the farthest outpost of mankind, the ISS. He is positioned to get a panoramic view of the earth as no one can. He has been taking great pictures of Earth from the ISS and has a Twitter account where he has been posting these wonderful pictures.

The latest picture of Southern India as it looks from space freckled by lights and allied by a network of rail, luminous threads.

Scot Kelly along with another American Astronaut and also Cosmonaut Mikhail Korniyenko has been aboard the ISS for more than 342 days. The team is the subject in a scientific experiment on how long term space travel affects the human health. It could be a precursor for future rendezvous with Mars which is the next goal of mankind.