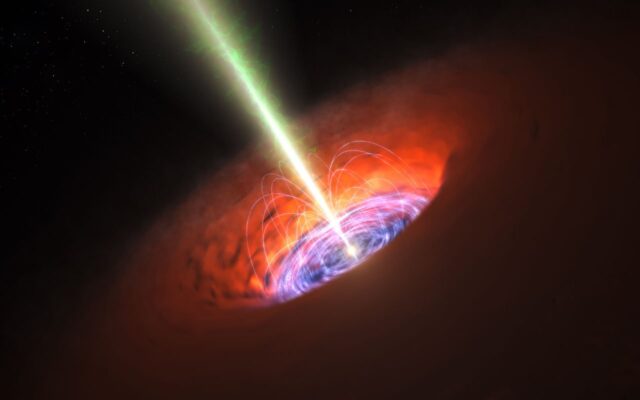 Goteborg ― Astronomers from Sweden reveal the presence of an extremely strong and powerful magnetic field, very close to a supermassive black hole. The black hole is in a distant galaxy. Five astronomers from the Chalmers University of Technology, Goteborg formed a team to find an extremely powerful field of magnetism. This hasn’t been detected on any black hole in the core of a galaxy. The magnetism was detected to be very close to the event horizon of the supermassive black hole.

Till now, the magnetic fields detected on a supermassive black hole were found to be very weak. These were also several light-years away from our solar system. According to Ivan Marti-Vidal, the lead author of the work, these new observations will help the astronomers to “understand the structure and formation” of such supermassive black holes. Interestingly, these are found in the centers of galaxies. It will also help the astronomers to understand the “twin high-speed jets of plasma, which frequently eject” from the poles of black holes.

The black hole resides in the center of a galaxy named as PKS 1830-211. The astronomers were able to detect signals, whose intensity of being received is directly proportional to the strength of magnetic field. The team of astronomers could detect the strength of this magnetic field by studying the way in which light had been polarized. This polarization took place as the light waves moved away from the supermassive black hole.

Martini Vidal explains that polarization is “an important property of light” and this property of light is used in various technologies supporting daily life. To cite a few examples are the “sunglasses or 3D glasses” at the cinema.

Scientists have received such clear signals of polarization rotation, which are hundreds of times greater than even the highest ever found in our vast universe. Martini Vidal explains that such studies will help us to understand what is going on “in the immediate vicinity of Supermassive black holes”.