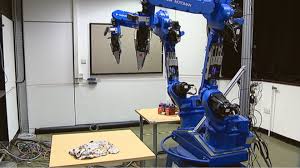 Glasgow, Scotland – Imagine a robot gearing up to fold one’s clothes, sorting them one after the other.

Scientists at Glasgow University have revolutionized in developing a robot that can become a user’s assistant and carry out sorting and folding operations.

The robots’ operating system can be fine-tuned to operate using a myriad of machines, used for catering to household chores.

The machine was built after strenuous labor for three years, using a myriad numbers of digital cameras as eyes and varied sensitive grippers as hands.

The robot is named as ‘Dexterous Blue’. It has pressure sensors on the grippers.

It can be used to feel the particular texture of any clothing. With the usage of microphones, this robot rubs available material, thus helping in picking the sound up.

The project is aimed at easing the lifestyle of individuals. The project has been named as CloPeMa, which is an acronym for Clothes Perception & Manipulation.

The scientists are zeroing down to prosthetic hands that would be like appendages for cutting cakes with the robots. The point is ensuring that there is 100% accuracy involved.

Dr. Siebert sets an example
This top notch project has been led by a British scientist, Dr. Paul Siebert.

The idea is on making clothes using similar machines across the factories. It is apprehensible that perhaps not much computing may be carried out by the machine.

The facilitator predicted that not many individuals can carry out daily chores, and hence the robot shall come to the fore. Robots carrying out chores may soon be realized rationally.

The scientist predicted this change would happen in a decade.
There are exciting prospects, and with the changes happening thick and fast such robots may be a reality very soon.

The robots shall be fine-tuned to perform specific operations and hence may not have much of a storage.