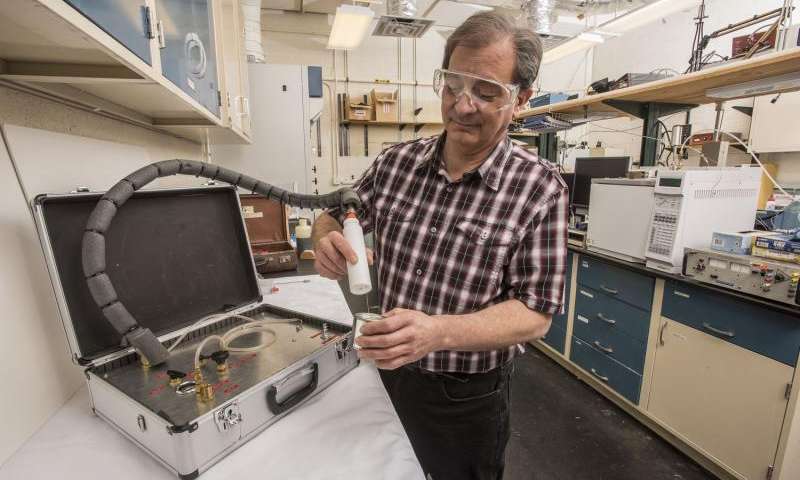 A chemist at the National Institute of Standards and Technology has developed a portable kit that can be used to recover traces of chemicals like forensic evidence or Semtex and other plastic explosives. It can locate wide applications in the forensic field like sniffing out secret graves and arson attack remnants.

The process is also known as PLOT-cryo-adsorption or PLOT-cryo in short. It stands for Porous Layer Open Tubular Cryogenic Adsorption. The process is very sensitive, quantitative and can be used in some ways as compared to conventional methods. It could be used to detect compounds that do not evaporate easily or are not water soluble.

The process recovers the vapors for evaluation by suction or by sweeping an inert gas over a sample that has to be analyzed. The more sensitive version has been used to test traces of explosives, stale food, and residues in the aftermath of an arson attack and grave soils.

If the industry commercially launches the process, it will prove to be a very handy tool in the hands of detectives. It is a portable version of the NIST’s headspace analysis method that sniffs out solid or liquid compounds based upon the composition of the vapors released in the air.

Tom Bruno, a chemist at the NIST or the National Institute of Standards and Technology, has developed this relatively simple tool that will be of immense use to the Law Enforcement Departments.

The tool will be able to sniff alcohol in a jiffy and also helps to identify drugs and other psychotropic substances. The study has been reproduced in Journal of Chromatography A.