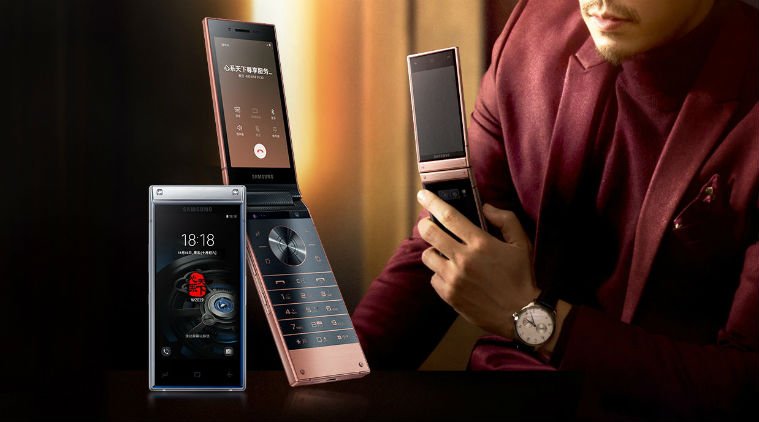 The Korean smartphone giant Samsung has now revamped its ultra-premium W-series with the launch of new Samsung W2019- a clamshell phone with flagship grade specs, in China.

The phone sports an anodised aluminium body with a diamond-cut finish and is available in silver and Gold colour options. One of the main highlights is its unique flip form factor which incorporates dual displays, an outer one followed by one under the clamshell. Let’s talk about the specifications in detail.

As mentioned, the Samsung W2019 comes with two 4.2-inch Super AMOLED displays, both having a Full-HD resolution of 1920×1080 pixels in a traditional 16:9 aspect ratio.

Under the hood, the device is powered by the Qualcomm Snapdragon 845 SoC, coupled with Adreno 630 GPU, 6GB of RAM and 128GB of internal storage. It is also available in a higher 256GB storage configuration.

Talking of the optics, the W2019 gets a dual camera setup at the back, featuring a 12-megapixel primary wide-angle shooter with a variable aperture (ranging between f/1.5 to f/2.4), reminiscent of the one on Galaxy S9, along with a 12-megapixel telephoto lens that has an aperture of f/2.4, aiding for 2X optical zoom. While on the front, we have an 8-megapixel f/2.0 camera unit for selfies.

On the software front, the handset runs Android 8.1 Oreo with Samsung’s Experience UX layered on top and is backed by a 3,070mAh battery. Other features include a dedicated button for Bixby and a fingerprint sensor on the side button.

Connectivity features include Dual-SIM support, Wi-Fi, Bluetooth, GPS/A-GPS, NFC support, and a type-C USB port. Lastly, it has dimensions of 132.9 x 63.4 x 17.3mm and weighs quite heavy at 257grams.