With all the rumors flying in about Samsung’s next flagship, the latest one suggests that the Galaxy S8 release date may be April 18.

Now this means that Samsung has pushed back its next flagship’s launch date to a later date. Earlier, the Korean manufacturer was expected to unveil the Galaxy S8 at Mobile World Congress in Barcelona next month, however the aftermath of the Galaxy Note 7 fiasco may have led to the delay in launch.

The latest rumor is also in line with a recent report which tipped that the Galaxy S8 release date won’t be at the usual MWC unbox event in Barcelona. Instead, the smartphone is said to be announced at an event in New York in April.

Meanwhile, several reports also suggest that the first alleged photo of the Galaxy S8 has surfaced on the web. The leaked image shows the upcoming flagship decked in metallic gold and a curved edge screen. In addition, the alleged photo also reveals other key details such as the lack of a physical Home Button and an almost bezel-less display. Also, the Samsung logo is embossed at the bottom of the display in the leaked image, unlike its predecessors where it was on top. 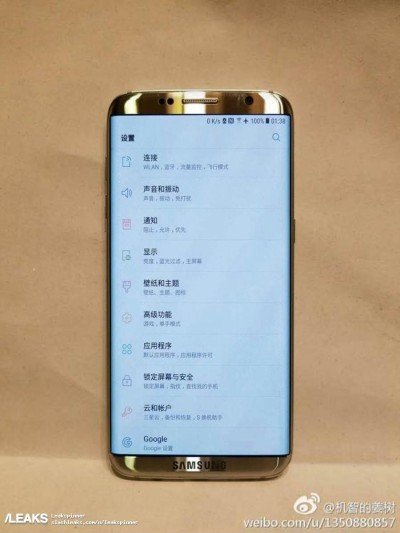 Recent leaks do point to the fact that the Galaxy S8 might pack some cutting-edge hardware such as Bluetooth 5.0, a Qualcomm Snapdragon 835 processor bundled with 6GB/8GB of RAM, stereo speakers. Also, Samsung is said to ditch the classic 3.5mm jack with its next flagship. Instead, Samsung will go for the new USB Type-C standard with its next flagship. It is also expected to come with UFS2.1 flash memory. In terms of key design changes, the bezel of the upcoming Galaxy S8 is said to be almost negligible, as the screen is expected to cover around 90 percent of the phone’s front panel.