While we are still on our way to understand the new Android 4.4 KitKat Operating system better, the supposedly leaked screenshots of Android 4.4.2 KitKat upgrade for two Google devices have buzzed the web world. Samsung’s Galaxy S4 and Note 3 were supposed to be upgraded by the first quarter of 2014 according to the official reports coming from Samsung. In addition, Phonearena had reported that mobile carriers confirmed that the S4 would be upgraded by the end of January.

The screenshots leaked on the Internet shows that the interface has been completely refurbished. We hope that in coming days even Galaxy S5 will receive the similar upgrade. The devices with upgraded versions of KitKat are expected to be faster than ever before. With the introduction of Samsung’s new PRO line of tablets, the announcement of the new version of KitKat was made earlier this week. 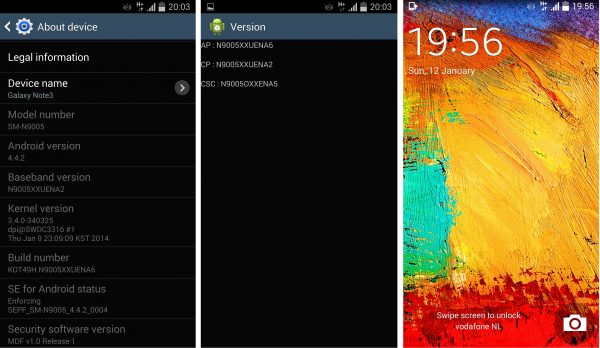 From the leaked pictures, it is very clear that the OS installed in Galaxy Note 3 and Galaxy 4 does share many similar tweaks. The Android 4.4.2 update features a white status bar icons and a lock screen camera shortcut in both the devices. Android 4.4.2 update will come with a full screen album art on the lock screen. Further, the devices using the upgraded version of Android 4.4.2 KitKat will come with considerably improved performance. It indicates that Note 3 will be equipped with a faster unlocking process.

The Android 4.4.2 test upgrade update for the Galaxy S4 (build number I9505XXUFNA1) is also available for download. So users who are keen to avail the new upgraded version and don’t want to wait any longer for Samsung’s official launch can go ahead and download it instantly. However, who want to wait for the official launch, according to SamMobile, the official version liketobly to be available within the next few weeks.