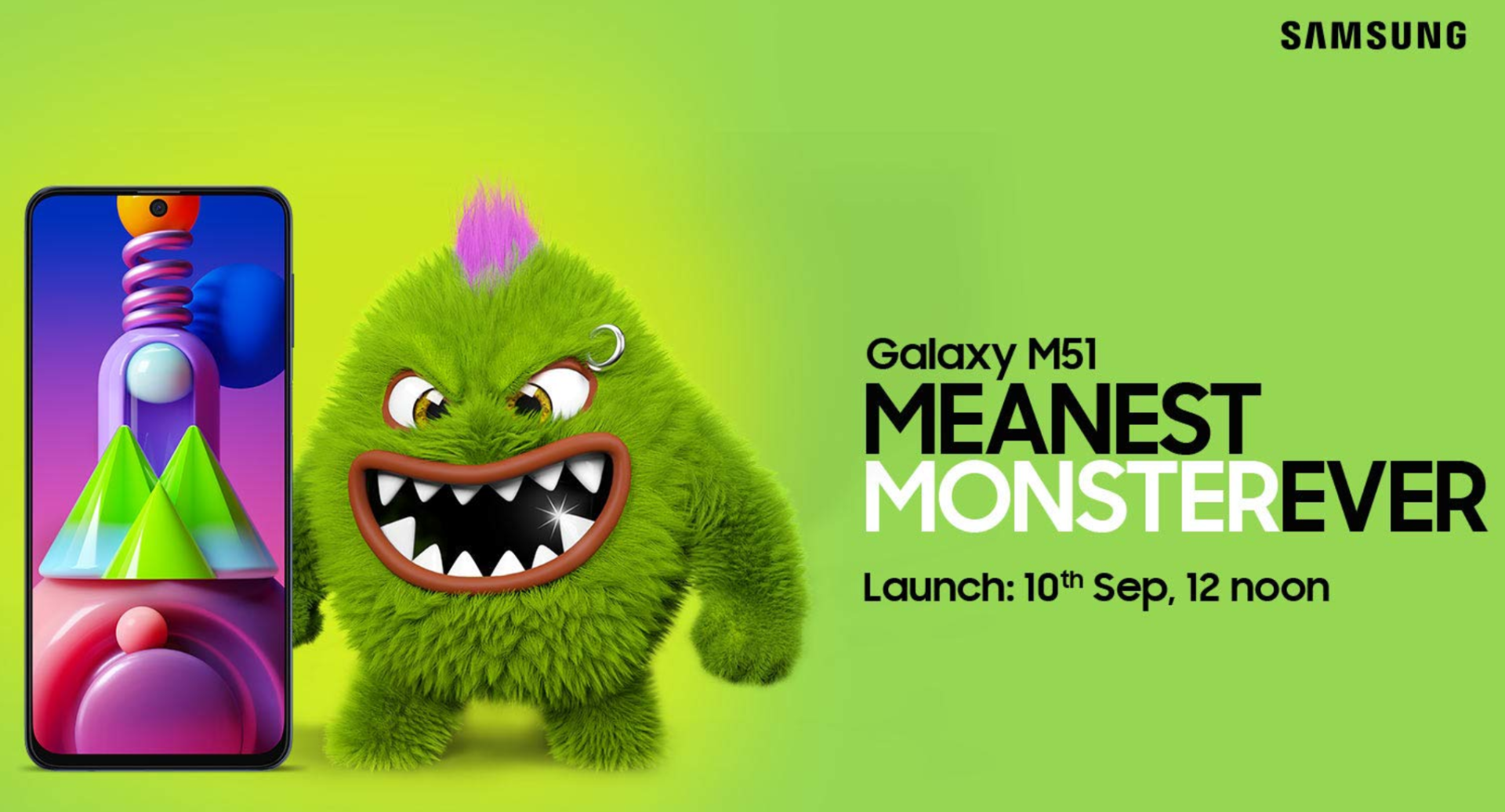 The new Samsung Galaxy M51 is all set to storm into the Indian market on 12:00 PM on September 10. An Amazon microsite for the phone revealed the above though there is no mention of the all-important pricing for the phone in the country. Interestingly, the India launch date has been revealed just a day after the phone went official in Germany, where it is selling for 360 Euros for the sole 6 GB + 128 Gb model.

The site, however, does reveal some information about the phone, much of which is already known to us. The highlight, though, is the massive 7000 mAh battery, which is the highest you get on a Samsung device. No wonder the huge battery has already earned the phone the nickname ‘Meanest Monster.’

The phone otherwise comes with a familiar design, which includes a 6.7-inch full-HD+ Super AMOLED Plus Infinity-O Display with a hole-punch to accommodate the front cam. As already stated, the phone on sale in Germany comes in a single model with 6 gigs of memory and 128 GB of storage. The processor’s make hasn’t been mentioned though it is believed to be the Snapdragon 730 CPU powering the phone.

Flip over to the rear, and the design again is quite similar to the recent Samsung launches, such as the Galaxy M31s or the Galaxy M21. That includes a rectangular camera module, which, on the M51, hosts four lenses. Those comprise of a 64 MP f/1.8 primary camera, a 12 MP ultra wide-angle lens along with a pair of 5 MP lenses for depth mapping and macro shooting, respectively. For selfies, there is the 32 MP front shooter peeping from within the front punch hole.

Other features of the phone include a fingerprint sensor integrated within the side mounted power button. However, all said and done, the biggest positive of the phone is no doubt its massive 7000 mAh battery, which is backed by a 25 W charger. For connectivity, you have 4G LTE, Wi-Fi, Bluetooth, and a USB Type-C port.

As for the expected price, a direct Euro to INR conversion point to it being around Rs. 31000. That said, the India pricing could be less considering that phones are a bit pricey in Europe. That makes the new Samsung Galaxy M51 likely to be priced anywhere between Rs. 25000, and Rs. 30000.